The Pittsburgh Penguins wrapped up their pre-season schedule last night, finishing with an undefeated 2-0 record against AHL teams but a disappointing 1-2-1 against NHL clubs.

The Pittsburgh Penguins finished up their 6 game Pre-Season schedule going 0-1-1 against the Columbus Blue Jackets, beating the Chicago Blackhawks and their AHL affiliate Rockford IceHogs in shootouts to take the series 2-0, and falling to the Detroit Red Wings only to come back and beat their AHL affiliate Grand Rapids Griffins in the final game.

Overall they went 6 for 27 on the Power Play and 23 for 28 on the PK, and even won an impressive 191 of 353 faceoffs. The Pens out shot their opponents 202 to 150, and their overall possession was impressive with a +65 Fenwick and +61 Corsi. They even dominated physically, out hitting their opponents 175 to 115 and leading Blocked Shots 83 to 79. But they finished with a dead even 20 goals for and against. Sometimes you can do everything right and just not come out ahead.

We started Training Camp with 55 players and are now down to 29. So I decided to take a look at how the 26 skaters performed during the course of the Pre-Season. 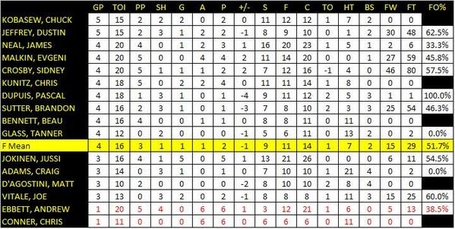