A quick look around what's gone on in the world around the Pittsburgh Penguins. Why the line brawl in Vancouver wasn't as notable as a hit Matt Cooke took and why the Pens better shape up fast.

The year of 2014 is 19 days old and the Pittsburgh Penguins only have played six games. In the next 19 days leading up to the Olympic break, they’re about to play 10. And only will they play, but have there’s some pretty challenging travel (for an Eastern Conference team, anyways).

The Pens are home for the first two games tonight and Wednesday, then take a jaunt east to Long Island on Wednesday before heading west to Texas to play the Stars on Saturday night. They’ll come back to Consol for a game versus Buffalo next Monday night before heading way west again for a game in LA on Thursday and then one in Phoenix next Saturday. There’s no rest to change time zones, as the Pens will be back in Pittsburgh to face Ottawa two days later (Monday Feb 3rd), followed by a short trip to Buffalo for a game two nights later and then back to Pittsburgh to finish it up Friday the 5th against the Rangers.

That’s tiring just to type. Hopefully the Pens got their rest in with only one game in the last eight games, because business is about to pick up.

A lot has been made of the ruckus in Vancouver, from the brawls and confrontations between the Flames and Canucks. It’s hard for me to pony up the outrage, because both teams got what they wanted.

Calgary, eager to reverse their poor season and try to impress Team President Brian Burke (who was reportedly in the house) wanted to show their toughness and their willingness to fight.

The miserable John Tortarella was understandably bothered by the lineup Calgary chose to start but how did he respond? I don’t fault him for not playing his skill players, who might have gotten jumped*, but he also could have put out a second or third line and told them to go about their business. Instead, Torts told his players "they’re starting their idiots, so we have to match that".

*Sort of like Torts’ own Tom Sesito jumped an LA King a few nights earlier..

No, Torts didn’t have to match it, but chose to. And, unsurprisingly, it boiled over into a line brawl. Tortorella could have defused the situation if he wanted, but in the old school eye-for-an-eye mentality, he fed right into it and then escalated it in his own way by the shenanigans in the Calgary hallway.

Shame on Calgary coach Bob Hartley for starting all his goons and thugs (for the first time in 25 road games) and shame on Tortorella for matching it and then going nuclear and trying to invade the Flames locker-room.

The same actions and line of thinking will bring the same results. If Gary Bettman and Bill Daly and the NHL honchos are fine with that, so be it.

The most serious violation this weekend, to me, happened in Minnesota with Dallas Stars star Jamie Benn elbowing Matt Cooke in the head. It’s been announced Benn will not face any discipline for that hit.

If that’s…say Jamie Benn on the receiving end and Matt Cooke with the elevated elbow, I can’t help but imagine there’s a lengthy suspension..

Even with a period of inactivity, the Pens remain way up in the division. And hey, don’t look now but the Rangers are 7-2-1 in the last 10, and Philadelphia is in prime position too with their turnaround. Columbus is riding a six game winning streak and has rejoined the playoff picture. New Jersey and Carolina continue to be directionless and the Caps are in free-fall. 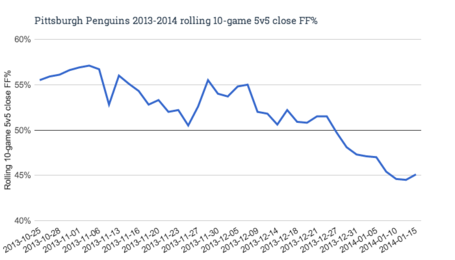 As pointed out in the SB Nation power rankings, the Pens possession numbers have gone down the drain in the past 10 games, likely a result of the significant injuries they’ve had to endure. As guys are coming back and now rejoining the lineup, let’s hope that they can get back to their ways of strong possession numbers, because they’ve been playing with fire the past few games, despite getting the strong PP and PK work to help get wins.

One of the things often cited about Simon Despres lately is that his attitude hasn’t been up to snuff. Reportedly he was upset after being made a healthy scratch in Dec 27, and even going back to training camp where whispers are he may have shown up out of shape (or may have simply just been playing poorly early in camp due to an illness).

Perception is often reailty, and especially to fans (this one included) who don’t get the full inside scoop on what is actually happnening. Regardless, to Despres’ credit, he’s not pouting down in the minors, as he easily could have. From Jonathan Bombulie of the Citizens Voice:

I know there’s a feeling that Penguins management is somehow dissatisfied with Despres, but if I stick to what I’ve seen with my own eyes, the kid is playing some unbelievable hockey. In his last 10 AHL games, he has six goals, three assists and a plus-14 rating.

And here’s the thing about those stats: He’s acquiring them without much power-play time at all. For the season, he has six goals and nine assists in 20 games. Only one of those 15 points — an assist — came on the power play.

So there’s that. At the worst, it can’t hurt the trade value, right? Good on Despres for still giving it his all, even if he has had a disappointing few months this season. Whether he’s in the team’s long term plans or not, Despres playing well bodes well for the Penguins either in a trade or by retaining his services for the future.

Finally, the sports nation is abuzz about Seattle Seahawks corner Richard Sherman and his animated post-game interview following his part in the game-winning play for the Seahawks.

Sherman was fired up, and he wore his emotions on his sleeve. But just a moment earlier he made probably what will be one of the best plays of his career to help send his team to the Super Bowl. I have no problem with a non-cliché and emotional interview, it sure beats a robotic one. Sherman also had a high GPA and graduated from Stanford (not a school for dummies) and did post-graduate work there too.

I don’t think he’s as dumb or ignorant as many people on social networks have blindly threw at him. He was fired up and he let it all out after making a big play. Many might have been turned off, and have every right to be if they want, but for me, I’m more inclined to watch personality and great play. Good for him.