Share All sharing options for: Sidney Crosby vs. Jonathan Toews

A look at the achievements of one Sidney Crosby and Jonathan Toews so far in their careers, done by Pensburgh's own @MikeDarnay 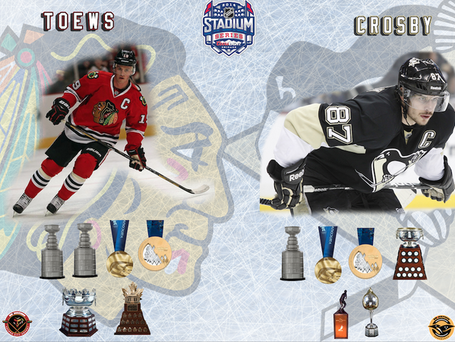 Not to cry over spilled milk, but the one thing that really sticks out above is just how few individual awards Crosby has won, relative to his dominance in this, the 9th year of his NHL career. He only has one Art Ross (for scoring champion) and one Hart trophy (for league MVP). It's a shame because in 2010-11 Crosby was running away with the points halfway into the season before the last time the Pens played outside... Also ditto that in the lockout-shortened 2013 season when Sid was way out in front on points 3/4 through the season when he broke his jaw. Add in those two scoring championships and MVPs and this graphic looks a little more representative of the way it should.

But, as it stands, it's a great look at the two captains of two of the best teams over the past several years in the NHL. Should make for a great stage on the frigid Soldier Field venue.