Visually plotting where the goals come from between Chris Kunitz and Sidney Crosby (on the first line) and the "second" line of Jussi Jokinen, Evgeni Malkin and James Neal.

Share All sharing options for: Crosby & Kunitz goals vs. the Jokinen-Malkin-Neal line's goals

The Pittsburgh Penguins are fortunate to have been in a golden era of offense, basically for the past 30 years now dating back to the early days of Mario Lemieux. Since then, Pens fans have seen multiple scoring titles and countless "take-your-breath-away" plays of individual glory.

This season hasn't been much different. Pittsburgh currently has the best record in the Eastern Conference (38-15-2) and their 176 goals is good for 4th best in the league. Individually, with 75 points (27 goals, 48 assists) in 57 games, Sidney Crosby is again running away with the Art Ross race, some 11 points better than the next guy on the list. Crosby's running mate, Chris Kunitz, is currently tied for 9th in the league in scoring with a tidy 1.00 points/game average (55 points in 55 games).

Evgeni Malkin has missed 11 games with injury, but he still ranks tied for 12th overall in points with 54 (16g, 38a) in 44 games. That's point/game rate is good for 3rd league wide, behind only Crosby and the injured Steven Stamkos. James Neal, who's missed 21 games due to injury/suspension, is right behind his linemate Malkin at 4th league wide in points/game with 41 (17g,24a) in just 34 games. That line's usual 3rd member, Jussi Jokinen, is 5th on the Penguins in scoring with a very respectable 40 points (16g, 24a) in 55 games.

If the above answers "how many", let's look at from where these goals are going in, courtesy the tracking of our own @MikeDarnay. 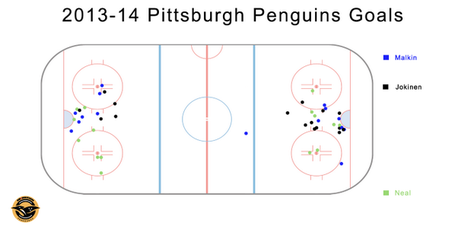 As you'd probably expect, this plot shows a lot of creativity and imagination, fitting for players like Neal and Malkin who like to take shots from space and have the power and skill to convert scoring chances from virtually any angle or distance from the net, or while on the rush. A significant number of goals come outside the vaunted "triangle" area created from the crease to each of the faceoff dots on either side. 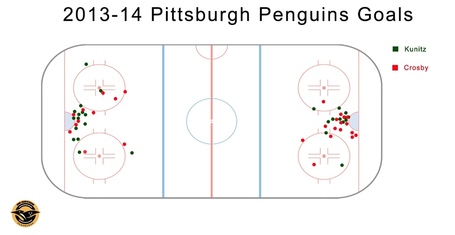 This picture is in stark contrast from the one above, with the most intensity and action concentrated right in front of the crease, painting a visual of more "dirty" goals. However, that isn't to discourage or cheapen them in any way, as it takes a lot of resolve to keep going into these high-price areas and then have the skill to actually fight off defensemen and goalies as well to score. It's not as simple as just "go to the net" (or else Eric Tangradi would probably be an NHL All-Star) but a player has to be able to create offense once he gets there, and quickly react to turnovers and get back in position to back-check as well.

Goals are goals and we'll take them from no matter where they come from. Styles make lines and a display of chemistry is in effect here. Much of Jokinen's goals come from in space, and at this stage of his career he's mostly a perimeter player- so he has fit in very well on Malkin and Neal's line, where they use their creativity and skill to move the puck all around the offensive zone and create time and space for shots from anywhere.

Others, tried on this line in the past have failed, probably because they didn't have the ability to keep up with the uber-skilled Malkin/Neal combo and didn't make enough good puck decisions to be a productive and viable player. Jokinen, a former 30 goal NHL scorer and veteran, has had no such issues there.

To play on Crosby's line (and a good lesson to take when thinking of whom may replace the injured Pascal Dupuis) requires a different skill set. One of excelling in the cycle game down low and against walls, because that's where Crosby and Kunitz key in on, using their strength, positioning and Crosby's playmaking ability to draw in defenders down low before attempting to create offense to an open linemate or defenseman.

Dupuis has those skills, and he also had the hands to produce goals (scoring 25 in 2011-12 and 20 more in the lockout shortened 2013 season). Given the history of players who have thrived most with Crosby, the Pens would be wise to target a player comfortable and capable with playing "down-low" possession players like Crosby and Kunitz to ensure the best chance of success for that line.