The next chapter of Crosby vs. Ovechkin

When playing head-to-head, Sidney Crosby and the Pittsburgh Penguins have gotten the better more often than not on Alex Ovechkin and the Washington Capitals.

Share All sharing options for: The next chapter of Crosby vs. Ovechkin

The Pittsburgh Penguins have had a lot of success over the years against the Washington Capitals, dating back to the days of Mario Lemieux and Jaromir Jagr in the 1990's seemingly beating the Caps every spring in a playoff series.

The more things change, the more they stay the same. Now it's Sidney Crosby with a 18-7-2 record head-to-head with Alex Ovechkin and the Caps, with Crosby out-scoring Ovechkin 46-33 in games the two of them have both played. Feast your eyes on the purdy inforgraphic courtesy of Christine Mina, Evan Schall and Jason Seidling from the Penguins. 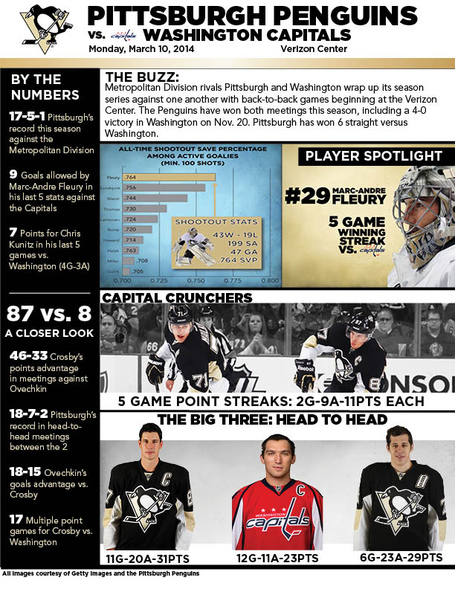 And behind the bench, Dan Bylsma has a 5-0-0 record against Caps bossman Adam Oates. Oates will have two chances in the next two days to earn in first win against Pittsburgh, and it's coming at a critical time for Washington. The Caps are currently in 5th place in the Metropolitan Divison- 3rd place Philadelphia is three points (and one game in-hand) ahead of them. The Caps are also just one point out of the final playoff spot in the wild card position, and are right in the mix of five teams (CBS, DET, WSH, NJD, OTT) fighting for that last spot and all separated by four points. The Caps need to beat the Pens not just because it's a rival, but just to help get them into playoff positioning.

Expect a desperate, motivated, driven team playing with their season on the line, because in a way it is. If the Caps lose both games in this home-and-home, they'll remain with 70 points in the standings with just 15 games left in their schedule, their chances of making the playoffs will be exponentially smaller. However, if they take 3 or 4 points of this series, it might energize them into the playoffs, which depending on how the seeding jockeys out, could include a first round matchup against none other than...the Penguins.

We wouldn't have it any other way. Go Pens.