Sidney Crosby and Chris Kunitz both crossed the 30 goal plateau last night, so let's take a visual look at where on the ice all these goals are coming from.

With 61 combined goals on the season (31 for Chris Kunitz and 30 for Sidney Crosby), the Pittsburgh Penguins boast the second most dynamic duo in the league right now- trailing only Anaheim's Corey Perry (35) and Ryan Getzlaf (29).

As we've done in the past, and courtesy of Pensburgh's Mike Darnay, let's look at where on the ice all of these goals are coming from. 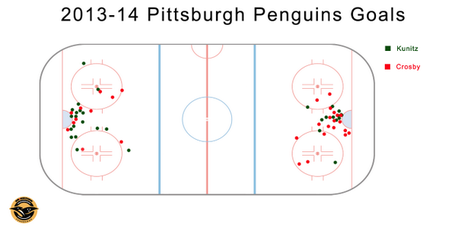 It's not a secret in this league- most goals come from the front of the net and a player must be willing- not to mention strong enough to be able- to be a factor winning battles down low and in the corners and then getting pucks and/or bodies to the net. Kunitz and Crosby are good at this.

But, as our own James Conley notes in the recap, could they have found another who is too? Lee Stempniak isn't the modern day answer to Rick Tocchet or Kevin Stevens, but he's at least got the size, jam and ability to be a decent cycler of the puck and has shown a little bit of hands too with his in-zone passing. As a veteran of 619 NHL games, Stempniak's experience trumps Brian Gibbons (23) and Beau Bennett (38) in the career games column by far.

If Stempniak can add a little to that line with strong play down low and a compete level to win pucks and setup Kunitz/Crosby, he'll be well on his way to being a viable Pascal Dupuis replacement for the rest of this season. The Pens couldn't or wouldn't make a big splash to get a fancier offensive name like Thomas Vanek, Matt Moulson or even Ales Hemsky, but as far as fits go, Stempniak just might be the man for the job.