Penguins and Flyers: The Battle of Pennsylvania

A look at the rivalry between the Penguins and Flyers, and the history between the two teams since their matchup in the 2012 Stanley Cup Playoffs, where the Flyers eliminated the Penguins in six games. They will meet this weekend in a back-to-back series, which also will feature a home game for both teams.

Share All sharing options for: Penguins and Flyers: The Battle of Pennsylvania

With a weekend series approaching between the Penguins and the Flyers, we decided to take a look at their recent history, dating back to their playoff series in 2012, and what has taken place between the two teams since, and some changes the teams have made since then. Yes, we are reminding ourselves of the torture of that playoff series. Still stings, still hurts.

The Penguins were the favorites in the series, and the Flyers embarrassed them. Badly. Then the Penguins embarrassed themselves. There were 3-0 series leads. The Flyers scored 8 goals in consecutive games. The Pens scored 10 goals in another game. Honestly, a series like I have never seen before.

In case anyone forgets, Kris Letang was thrown out of a playoff game. 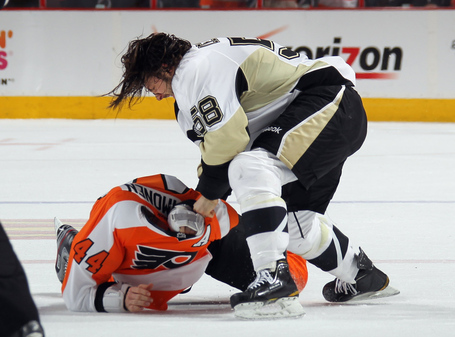 Marc-Andre Fleury couldn't keep the puck out of his own net. 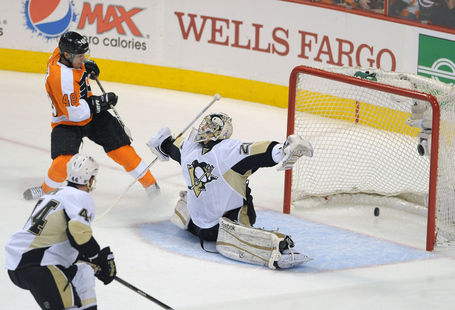 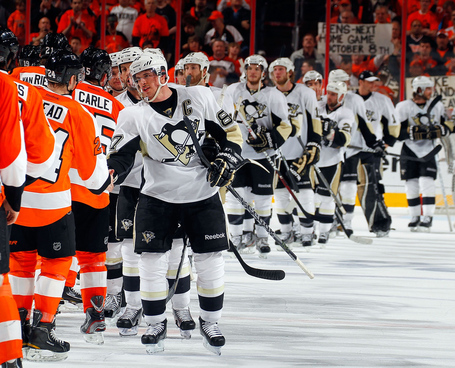 The days of calling Sidney Crosby the best hockey player in the world are over.

The Penguins and the Flyers opened the shortened 2012-13 season in the only way that seemed fitting: against one another. Fans were desperate for hockey and started the season off on the right foot, getting the road win at the Wachovia Center. The official start of the Paul Martin Redemption Tour of 2013.

The night we were all reminded that the January game not being a circus was just a fluke. The final score was 6 to 5, in favor of the Flyers. The Flyers erased a two goal deficit and took a two goal lead. The Penguins tied the game late.

This was the last crazy game the Penguins and Flyers have played. The two that came after this were moderately peaceful. If I had to bet, I would be willing to place money on the fact that a wild game will come in at least one of the two games this coming weekend.

#CBJ G Steve Mason confirms to The Dispatch he's been traded to Flyers. Trade call with league is pending.

The Penguins defeated the Flyers 4-1 in Philadelphia. Relatively quiet game, given the nature of how these games can escalate.

Another quiet one, Flyers won this one 2-1 in Pittsburgh, which started a 3 game win-streak for the Flyers back in the Fall.

Hearing that goalie Steve Mason has signed an extension with the Flyers. No other details at this point.

Upon the signing, you can see here, what our friends at Broad Street Hockey had to say about Steve Mason getting an extension

This weekend series that is upcoming should most certainly be entertaining. Fans in Pittsburgh are looking to see how the Penguins play in a playoff style atmosphere and if they can play their game against an intense rival and in a hostile environment. If the Penguins can come away from the weekend series with a split, it'd be good to keep confidence rolling. The Flyers are much more in need of the standings points than the Penguins are.

My prediction: an intense weekend of physical hockey, most likely high-scoring. I feel like this weekend will ultimately set things up for a 5th and final intense matchup when the teams play again on April 12th.