The Penguins and Their Injuries

An advanced stats look at the Penguins injuries they are facing, and how beneficial it will be to get players healthy and back in the lineup. Hint: Chris Kunitz and James Neal would be extremely beneficial.

Share All sharing options for: The Penguins and Their Injuries

The Penguins are dealing with a heavy dose of injuries and players kept out of the lineup right now. Getting players healthy and back on the ice and into game action will be key for clicking and playing winning hockey in the last stretch before the playoffs.

It's easy (and lazy) to pass off the argument, by saying "the Penguins still have Crosby and Malkin, so they should still be able to win."

In the nine games the Penguins have played since the Olympic break, they have had ONE game with a positive Corsi percentage. 51.4% in a 6-5 shootout loss to the Canadiens.

When you look at who the Penguins are without, and what those players do for the Penguins from a possession standpoint, it's easy to see why they are struggling to play their game right now.

In the nine games the Penguins have played since the Olympic break, they have had ONE game with a positive Corsi percentage. 51.4% in a 6-5 shootout loss to the Canadiens. Their average Corsi percentage in the other eight games? 43.75%. Not exactly dazzling numbers.

It's impossible to try and pinpoint the issues the Penguins are having now without considering who they are playing without.

Missing from the Penguins roster:

From an advanced stats viewpoint, all six of those players would be extremely beneficial to the Penguins to help get those possession numbers back above 50%.

Letang and Martin bring a negative Corsi Relative % to the table, but their solidarity with their partners will help those numbers come back on their own. Example: Brooks Orpik REALLY needs Paul Martin back. Jesse Marshall from Faceoff Factor touches on that here.

A look at the players usages: 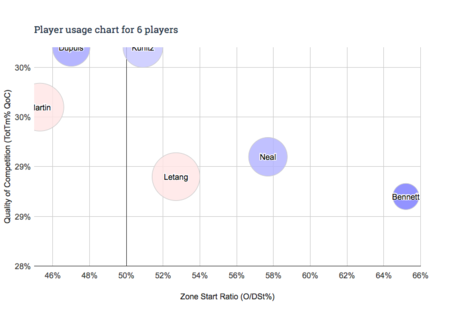 Sidney Crosby and Evgeni Malkin have to be licking their chops at getting players like Kunitz and Neal back in the lineup, despite it only having been a handful of games they have missed.

I guess what it all boils down to is this: getting players back from injury isn't the magical cure for the Penguins, but until they ice a healthy roster again, or at least one that isn't missing such key players, I think it's a little unfair to pass judgment of the Penguins being 'dead' just yet.