Courtesy of Jason Seidling and the Pittsburgh Penguins, let's take a visual look at the Pens vs. Detroit Red Wings. 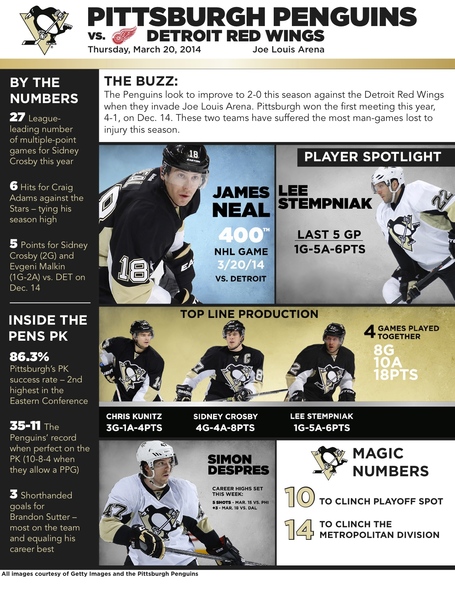 The highlight not mentioned is the injuries that both teams have suffered. Pittsburgh is #1 in man-games lost and Detroit is #2 in the league. The big difference is who has been injured- the Pens have been fortunate enough to have gotten almost full seasons out of Sidney Crosby, Marc-Andre Fleury and Evgeni Malkin has only missed a handful of games.

On the flip side, Henrik Zetterberg, Pavel Datsyuk and Jimmy Howard have all missed large chunks of the season, and the two star forwards aren't expected back any time soon as the Red Wings try to fight and claw for a playoff spot.

Based off the team's dual injuries, I wondered if I could create a playoff-caliber team just based on the hurt players. And, we pretty much can:

And just think if we did this last week and had Chris Kunitz and James Neal on board for the all-injured team, or earlier in the season when virtually every top-6 defenseman was injured for the Penguins.