A crazy game of bounces

Share All sharing options for: A crazy game of bounces

Hockey is a game of largely composed of luck, bounces and games can turn in an instant. Take a look at this sweet feature from the wickedly awesome extraskater.com showing win expectancy from last night's Pittsburgh Penguins and Detroit Red Wings game. 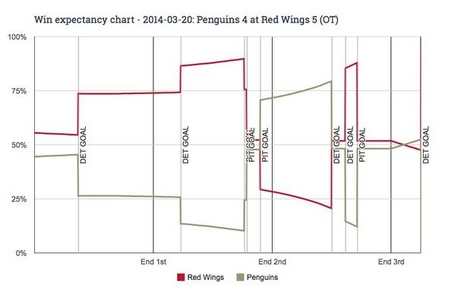 Detroit was riding high and coasting to an easy win, being as they were up 2-0 at home as the second period was ending. Then the Penguins scored three times in a span of 2:41 before the period ended to go from what looks like a 10% chance of winning to almost 70%.

Then in the third period Detroit would score two quick goals mid-way through the period to tip the scales back to their favor, only to see a game-tying goal by none other than Craig Adams with about five minutes left in the game to even the odds back close to 50/50.

After David Legwand 's dirty butt-ending play left Evgeni Malkin in a heap, the momentum shifted to the Penguins on a 5 minute power play. The Penguins didn't convert and then with seconds left saw defensive defenseman Rob Scuderi uncharacteristically make a center drive to the net. This drew him out of position so when the puck went the other way on a 3-on-1 Marc-Andre Fleury was left hanging, and Daniel Alfreddson's shot ironically went off Scuderi (charging back hard to get into the play) and into the net, just before the clock expired.

Hockey's a wonderful, wacky game and all its quirks were on display last night in Detroit. It wasn't the cleanest of games for the Penguins, highlighted by one of the weirdest finishes you'll ever see....Until maybe next game.