The decline of Rob Scuderi.

Share All sharing options for: The Penguins signed Rob Scuderi to a 4 year contract 4 years too late

July 2013, free agency was about to open up and the Pittsburgh Penguins had limited salary cap space. They were one month off an embarrassing sweep out of the playoffs by the Boston Bruins, and had decided to retain coach Dan Bylsma and goalie Marc-Andre Fleury.

Then, an opportunity struck to bring back an old face and piece of the puzzle and general manager Ray Shero just couldn't resist.

"It was a mistake to let Scuderi go on my part," Shero said, after he signed Scuderi to a four year, $13.5 million contract hours into free agency. "To have the chance at a do-over and bring Rob back, I think that’s a good day for us."

And, in the summer it seemed like a good day. Scuderi would be brought back to play as a safety net for Kris Letang, just as Scuds did for the LA Kings with Drew Doughty in their 2012 run to the Stanley Cup.

The problem, it turns out, is that Shero righted a wrong from 2009 in 2013. Scuderi, who turned 35 a few months ago, has looked his age in his return season back to Pittsburgh.

Shero even acknowledged at the press conference of the signing that giving term in a contract to a free agent is just a part of the game. "If I only want to offer a guy a two-year contract, he's going to go to the next team for a four-year contract," he said. "We know Rob Scuderi. If I'm going to pass on Rob Scuderi because I'm a little worried about what he's going to be like when he's 38, I'm not going to get him."

It hasn't been a season that went along to anyone's plans. In training camp, Letang hurt his knee and was out for the first few weeks of the season. Upon his return to the lineup in his second game, Scuderi blocked a shot and broke his ankle. Scuderi hadn't missed any time in the past three seasons, and only 10 games since the 2008-09 season and was now out for months.

From there, well, Scuderi's ice-time looks like this so far this season: 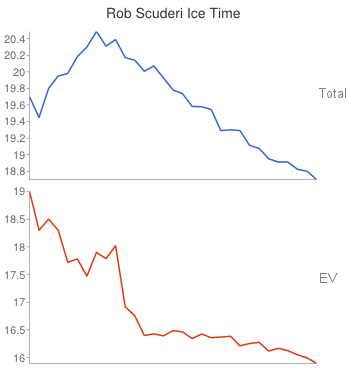 Despite injuries to Letang, Paul Martin and Brooks Orpik throughout the season, the constant has been a decrease of time for Scuderi. While the Olli Maatta and Matt Niskanen pairing has performed wonderfully and deservedly gotten a bigger role, Scuderi has slumped to be an after-thought to the Pens lineup.

It's difficult to know what, if anything, that Pittsburgh management will do about Scuderi's minutes moving forward. Even if Scuderi hasn't been the top four even-strength defenseman this season, he's still be vocal, like calling the team out for playing like the Harlem Globetrotters in January. But Scuderi wasn't signed just to diagnose the team's lax defensive play through the media, his spot in the lineup was supposed to improve the team's defense through his play as a reliable and steady defensive defenseman.

Ray Shero might regret not signing Rob Scuderi in 2009, but righting that wrong by signing him four years later might be four years too late

It is worth noting that Scuderi plays the third most minutes per game among Penguin defensemen on what's been currently the #2 penalty kill unit in the league so far this season. We'll give him credit for that, even if his GA/20 is the highest among the defensemen, because with that sample size, a couple goals here or there could wreck that. And Scuderi's 46 blocked shots in 31 games (1.48 per game) so far this season is actually more than last year when he led the Kings with 66 blocked shots in 48 games (1.375) last year.

Maybe the regular season will be all for naught. After all, if Scuderi can help the Pens win a playoff series and make a big, splash play- like say a big save at a key moment in the Stanley Cup Finals - all this regular season stuff will be easily forgotten. Once you're "The Piece" you show your value at those big, key moments. At least, in theory.

Let's hope so, because Ray Shero might regret not signing Rob Scuderi in 2009, but righting that wrong by signing him four years later might be four years too late.