With 63 games played so far this season, having only missed one game as a healthy scratch, Olli Maatta is on pace to play in 81 games and join a short list of 19 year old defensemen to achieve that goal as a rookie.

Halfway into the month of October, throughout Pittsburgh and the hockey world, people were wondering if Olli Maatta was going to be sent back to the London Knights after his 9-game tryout, or were the Penguins going to keep him to use the first year of his entry-level contract? Maatta made the decision easy for the Penguins and he stayed.

In December, a similar question based around a loan to Team Finland and the World Junior Championships certainly would have popped up again, but with the injury front that the Penguins were facing, it never came up as an option. Kris Letang was out with an elbow infection. Rob Scuderi was making his way back from his broken ankle. Paul Martin was nursing a broken leg. Brooks Orpik was still dealing with symptoms from his concussion. Olli Maatta and Matt Niskanen were the two mainstays on the Pittsburgh blue line and kept things stable while a rolling train of young defensemen from Wilkes-Barre rotated through the lineup.

It's difficult to say what Maatta's future will hold, and where he will rank with this list. But for right now, I'm comfortable just watching him play.

Maatta has missed ONE game so far this season. He was a healthy scratch after a poor performance, and seemed to respond incredibly to it. Having missed just the one game, he is on pace to play in 81 games, barring injury

We took a look at how many other rookies at 19 years old have played in 80+ games in their first season. The list is not very long. (via Hockey Reference)

This occurrence only happening five times in the last ten years or so makes the achievement that much more incredible. On all accounts, from conditioning, to the mental aspect of the game, to having enough talent to play in the NHL at 19, all facets are incredible.

On that list of 12, there is a large assortment of Stanley Cups, Norris trophies, Calder trophies, and lots of Olympic medals. In recent memory, 3 of the 5 recent players to achieve the 80 game mark were on Team Canada's roster in Sochi (Jay Bouwmeester, Marc-Eduoard Vlasic, Drew Doughty)

The achievement of 80+ games can be a bit more impressive when keeping in consideration the fact that Maatta logged heavy minutes for Team Finland in Sochi and came home with a bronze medal.

If Maatta does indeed play in 80, he would become the first European defense to achieve the mark at 19 years old.

In comparison to his fellow 19-year old rookie defensemen this season, Maatta's level of play, in respect to advanced stats, sits just a little bit higher. (via Extra Skater) 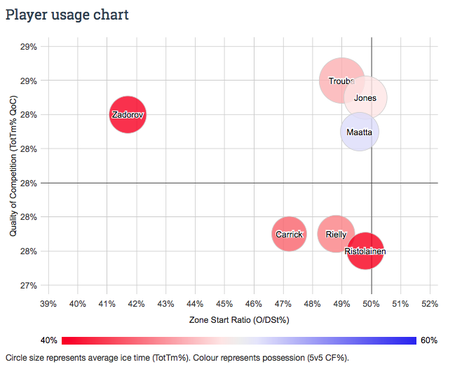 Playing on a team like Pittsburgh, with players like Malkin and Crosby who can control possession so easily skew this a bit, but its still impressive, nonetheless. Having the composure to be a positive puck possession defenseman at 19 is not an easy feat.

It is worth noting that Seth Jones of the Nashville Predators, also a 19 year old, is on pace to play in 80+ games as well. Rookies Hampus Lindholm (20 years old) of the Anaheim Ducks and Torey Krug (22 years old) of the Boston Bruins, both match the pace as well.

It's difficult to say what Maatta's future will hold, and where he will rank with this list. But for right now, I'm comfortable just watching him play.