Setting the Record Straight on the Penguins and Possession

Share All sharing options for: Setting the Record Straight on the Penguins and Possession

Some analysis heading into the playoffs has analyzed each playoff team's possession metrics since the Olympics. If you've paid attention to these articles, it's no secret that the Penguins' possession numbers during this time frame haven't been stellar. Yet while most commentators know of the Penguins' litany of injuries, few have tried to control for it. Or in other words, not many who give the Penguins little chance of success in the playoffs have actually looked at how the team performed when they were healthy. I'd like to add that context through this article.

First off, I want to briefly summarize the Penguins' possession numbers with Dan Bylsma behind the bench. I've seen some misinformation on the web, specifically on Reddit, that alleges the Penguins have struggled with maintaining possession while executing Bylsma's system. That is false: the Penguins have generally been an elite possession club throughout Bylsma's tenure.

Bylsma took over mid-year in 2009, but the changes he implemented had an immediate impact:

In terms of increasing puck possession, the best coaching changes since 2007 would be Michel Therrien to Dan Bylsma in Pittsburgh (46.3% Fenwick Close to 52.6%) . . . .

Bylsma's possession success was not short-lived. The following chart compares the Penguins' fenwick close numbers to the league average starting with the 2009-2010 season, Bylsma's first full year (all stats from Behind the Net): 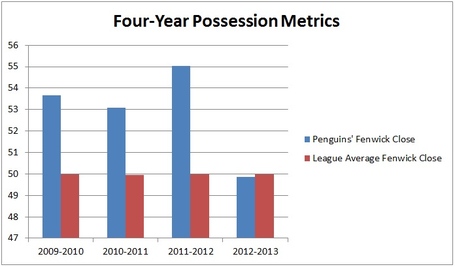 The evidence is clear that the Penguins have been an elite club in terms of controlling play. Their ranking in Fenwick close among the 30 teams in the league during this time was second, fifth, second, and fifteen. I've previously looked at what caused the big drop in 2012-2013 here and here (in short, it was the Penguins' loss of Jordan Staal).

With that in mind, I woke up to this image on Twitter today (from Travis Yost): 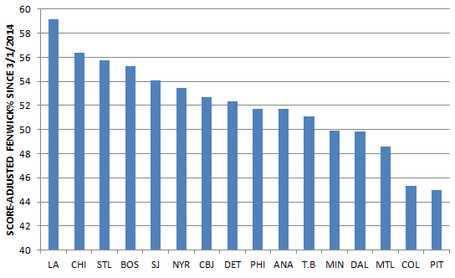 Things look bad at first glance. But of course, every claim about the Penguins this season has to be interpreted in light of the fact that they've led the league by far in man games lost to injury. And looking at post-Olympic play only means you're looking at the Penguins without their two best puck-moving defensemen. It doesn't take a hockey savant to see how those injuries would negatively affect the team's ability to control play.

More to the point, I wanted to look at how the Penguins fared before their injuries this year and compare that to their post-injury play. Using Vic Ferrari's time on ice reports, we can easily get the team's possession data through any set of games we want. Below is a graph comparing the Penguins' possession numbers through the first 22 games (before the serious injuries) with the subsequent 58 games (post-injuries). The data is for all even strength situations, not just score close: 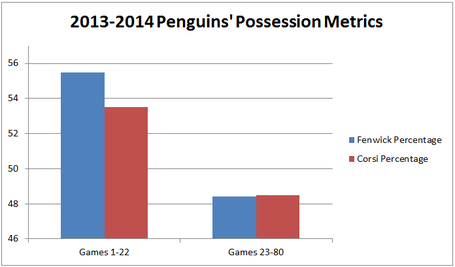 It's impossible to miss what's going on here. This team's historic run of injuries has decimated them through most of the season, and it shows up clearly in the underlying possession metrics.

The always dashing Mike Darnay (whom you should follow on Twitter) has composed a number of charts not only illustrating this point but also how important Letang and Martin have been to the lineup: 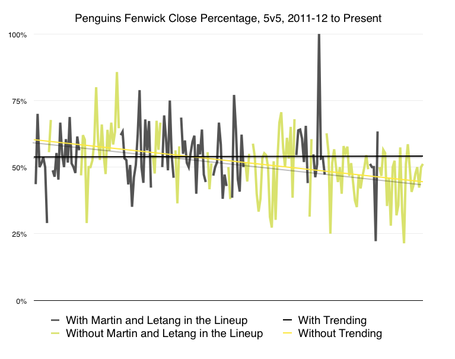 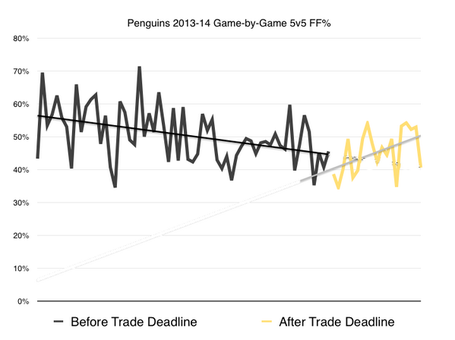 The first graph clearly shows how critical Martin and Letang are to having a successful possession game. The second graph shows that the Penguins were able to get solid reinforcements at the trade deadline that helped alleviate some of the bleeding. Note also that the Penguins have only been getting relatively healthy since the trade deadline, which explains part of the possession increase. Moreover, we have this gem from Adam Gretz:

The Penguins have had Kris Letang and Paul Martin in the lineup just 96 times the past 3 years. They're 64-25-7 and a 53 percent FenClose.

Based on all of this, it's clear that a healthy Penguins team can produce (and has produced) elite possession numbers this year. They fortunately seem to be getting healthy at the right time, which means that the Penguins should not be expected to make an early and abrupt exit from the playoffs.