Get to Know a Blue Jacket: Cam Atkinson

Share All sharing options for: Get to Know a Blue Jacket: Cam Atkinson 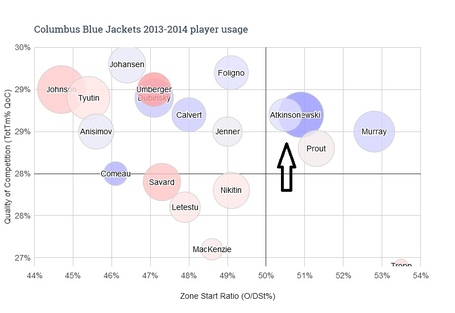 Analysis: Decent to above-average possession numbers for an above average possession team team. One thing that jumps out is that Atkinson is the only forward to get 50%+ zone starts in the offensive zone. Given his lack of size (and abundant skill) it would make sense to skew starting this player more in the offensive zone to try an generate a scoring chance, rather than start him the defensive zone, where he could be out-muscled and possibly contribute to Columbus getting pinned in their own end for a while.

Most common linemates: Brandon Dubinsky (who's been attached at the hip for on the ice for 677 of Atkinson's 991 5v5 minutes) and Matt Calvert. The trio are expected to be the second line for Columbus at the start of the series.

Why you should know who he is: In just his first full-time NHL season, the former Boston College star finished 3rd on the team in goals and 4th in points, with an impressive knack for scoring goals. Atkinson has played 15:47 per game this season, 13:23 at even strength and then 2:13 on the PP with minimal PK duties. He's an offensive weapon, and for a team that traded Marian Gaorbik (and has lost Nathan Horton for 6 weeks to another injury) will be an important part for the Penguins / Jackets series.

How the Pens can stop him: Body up the smaller player and don't let him get any time and space. Pittsburgh blanked Atkinson this season, and if the Brooks Orpik / Paul Martin pair matches up with the #1 line (Ryan Johansen) then it'll likely be up to either the Kris Letang/ Rob Scuderi pair or the Olli Maatta/ Matt Niskanen unit to play against Atkinson. None of those defensemen are necessarily known for their physicality, but it won't take a lot to contain a 5'8, 174 pound player. The challenge will be attention to detail and focus, to make sure that he doesn't buy himself some space in the offensive zone.