Get to Know a Blue Jacket: Boone Jenner

Share All sharing options for: Get to Know a Blue Jacket: Boone Jenner 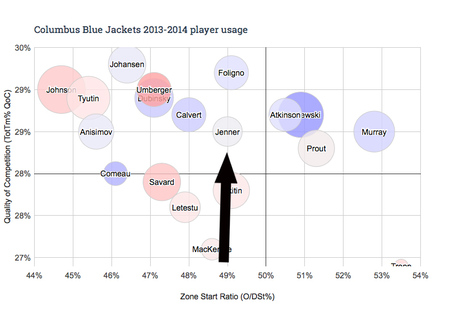 Analysis: Booner Jenner is an average possession player, but not expected to be dazzling offensively, as he is the definition of a two-way player. He is known for having an underrated shot but unmatched work ethic. He is tough to beat on the boards and great at creating space for his teammates in the offensive zone.

Most common linemates: Jenner has spent most of his time this season on a line with Ryan Johansen, and has played quite well. The two of them combining for 90+ points this season, at age 20, and 21, respectively, is impressive and I would look for them to be a good chunk of the offense created by Columbus against the Penguins.

Why you should know who he is: Jenner will be an important player, because he could be the "Scott Hartnell" or "Wayne Simmonds" of the Blue Jackets- that pesky winger that can score goals and get under the skin of the Penguin players. Jenner is a fast, spirited young player and one that Penguin fans will not like by the time this series ends.

How the Pens can stop him: Having a player like Olli Maatta matching Boone Jenner is a good recipe. Maatta keeps his gap control very well, and keeping Jenner from gaining speed into the zone and getting clean looks and shots on goal are key to keeping him off the scoresheet.