Get to Know a Blue Jacket: Ryan Johansen

Share All sharing options for: Get to Know a Blue Jacket: Ryan Johansen 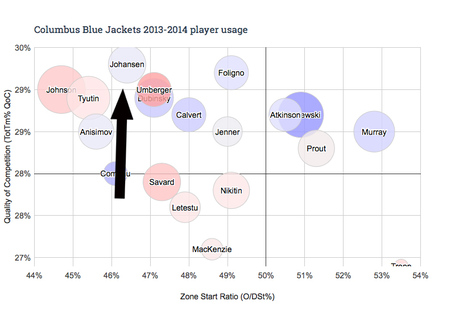 Analysis: Possession numbers are good for a young player on an above-average possession team, especially considering that he is facing top competition amongst players on his team. Seems like Johansen at 1C will be a mainstay in Columbus for a long time to come. He has stepped up big down the stretch this year for Columbus in their playoff push.

Most common linemates: Spent a significant part of the year playing with Nick Foligno and R.J. Umberger, but with both players injured at the moment, Johansen has been playing with Boone Jenner and Blake Comeau on his wings. Johansen and Jenner together bring a lot of speed and young legs that could give the Penguins fits if they are not careful. This kind of young line reminds of the Islanders speed last spring.

Why you should know who he is: Playing 82 games as a first line center at 21 years old is pretty impressive in the current NHL. Scoring 30 goals is quite impressive as well. The Blue Jackets top two lines, with players like Johansen, Cam Atkinson, Boone Jenner, and company will have their hands full with the likes of Crosby, Kunitz, Neal, and (maybe) Malkin and will be an integral part of trying to make it a series.

How the Pens can stop him: Pittsburgh essentially shut down the Johansen line this season, holding him to 1 goal in five games. if and Brooks Orpik and Paul Martin matchup with the #1 line as they have in the past, and they can simply limit their time and space and maintain their gap control, it's not unreasonable to imagine Columbus' 2nd/3rd lines feeling more pressure to get the puck in the net.