Get to Know a Blue Jacket: Artem Anisimov

Previewing the Columbus Blue Jackets vs Pittsburgh Penguins playoff series and we turn to a big Russian center. No, not Evgeni Malkin, but Artem Anisimov

Share All sharing options for: Get to Know a Blue Jacket: Artem Anisimov 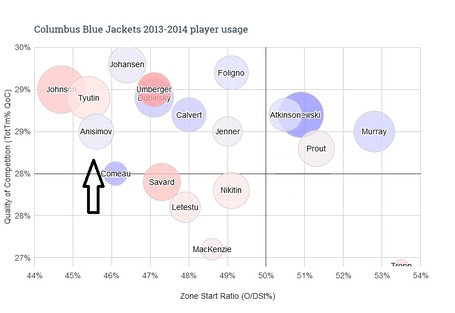 Analysis:Anisimov is one of the most well-rounded players on the Blue Jackets. While he's only 9th overall in ES minutes per game among forwards on the team, he's 3rd in short-handed time and #4 in power play (among current, not-injured players). He's a very valuable player who still puts up solid possession numbers despite getting a heavy workload in the defensive and neutral zones.

Most common linemates: Anisimov practiced on what was called the 4th line with Derek MacKenzie and Blake "No" Comeau. Anisimov's most common regular season linemates were Boone Jenner (who's currently on the top line with Ryan Johansen) and Nick Foligno and RJ Umberger ( both currently injured).

Why you should know who he is: Anisimov has been a pain to the Penguins, scoring goals against them frequently. Mostly this has happened when he was with the Rangers earlier in his career, but with his size, puck skills and defensive ability, he can change games when he's motivated and in the zone.

How the Pens can stop him: Stop him before he gets the chance. As a player who often has to start in the defensive zone, if the Pens can win the faceoff and pin Anisimov in his own end, he'll have less of a chance to get the puck for shots himself. If Anisimov plays with 4th line caliber wingers, he might not be as dangerous as if he was used differently.