The Pittsburgh Penguins were down, but not quite out. They found a way to dig deep and score three third-period goals in a 2:13 flurry to take game 3 from the Columbus Blue Jackets.

Let's count some of the hockey archetypes/clichés on display tonight.

Show some resolve. Bodies to the net. Pucks on goal. Face adversity and overcome it. Redemption in net. Fending off a last second attempt. And, yes, get to our game.

The Pittsburgh Penguins did a little bit of all of that, gutting out a 4-3 win in Game 3 over the Columbus Blue Jackets thanks to a great third period that saw them score three goals on three shots in a 2:13 span.

The seed of most unlikely of comebacks was planted by the most unlikely of sources when Brooks Orpik scored a buzzer-beating goal in the second period, by calmly dragging the puck behind a sliding defender, to halve Columbus' lead. I'll pause here to let you read that sentence again.

The Jackets would re-establish their two goal lead early in the third, and Pittsburgh didn't just "say die", they showed some guts and came back. It was a simple but effective formula- get bodies to the net, get shots from the point to the net. And, sure, get some good luck in the form of bounces.

First, Paul Martin's point shot got deflected by Brandon Sutter, who was posted in traffic in front of Sergei Bobrovsky. Shortly after, Chris Kunitz made a nice pass to a streaking Lee Stempniak who blew a shot over Bobrovsky's shoulder.

Then, for the eventual game winner, with Evgeni Malkin and James Neal in front, Olli Maatta took a point shot that deflected off defender James Wisniewski. 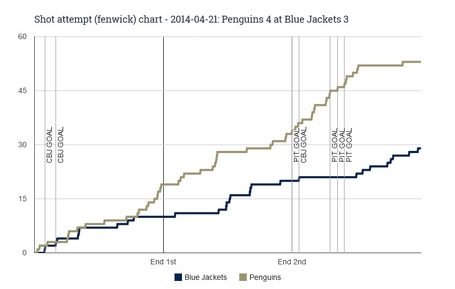 This image was almost the whole recap. After two shaky early goals, the Penguins definitely stabilized and threw everything and the kitchen sink at Bobrovsky. It didn't pay off until the sequence in the 3rd period, but they certainly appeared to get back on track.

A few more thoughts on the game:

Interestingly, a multi-goal lead has been blown in each of the three games of this series. Columbus had a golden opportunity to take this series over, but it slipped away to the more experienced team who pushed just hard enough at just the right time and ended up making their luck.

How will this game effect Columbus moving forward? Can they recover from this? Will Malkin and Crosby be held off the board again on Wednesday? It seems like a matter of time before a big game from the big boys and if that happens, these messy games might be a lot cleaner. It may be a little early to definitively say the comeback in this game has clearly tipped the series, but it's potentially a big moment in the series, and season, of the Pens to show some resolve and defy adversity.