Evgeni Malkin is confident, and he should be

Evgeni Malkin says he's confident and the data shows that he has great reason for that claim. The superstar hasn't scored a goal yet this series, but it is just a matter of time if he can keep up his play.

Share All sharing options for: Evgeni Malkin is confident, and he should be

When Evgeni Malkin talked to the Tribune Review's Rob Rossi, one word popped out, and not just because it was the lede of the story.

Confidence. That's a word that Pittsburgh Penguins fans have to like to hear out of one of their star centers.

True, neither Malkin nor his running buddy James Neal have scored a goal this series. Look back to the Boston series (though I'm not sure why you'd want to) and it's been a very long time since either has hit the net in a playoff game.

But after reading that Malkin is confident, I have no worries. And after seeing what some of the data below shows, I'm really not worried about the play of #71. 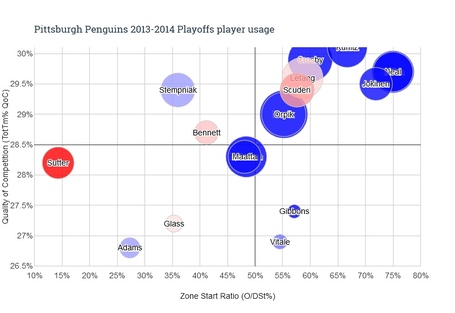 Malkin's bubble isn't visible, because he's covered up by Neal, since they have the same quality of competition and zone starts, showing just how attached at the hip they have been. At least early on in this series, the Penguins are burying Brandon Sutter with defensive zone responsibilities and the good work of the Sidney Crosby line is allowing the Malkin line a lot of favorable zone starts.

This, unsurprisingly, has transferred into Jokinen-Malkin-Neal having some the most impressive possession based stats through the first three games of the playoffs. Per Extra Skater, Malkin has a Corsi For % of 64.2% - meaning of all the Corsi events while #71 is on the ice, 64.2% have been by Pittsburgh. That's top on the team. Malkin's Fenwick For % is a team his 64.8% and his relative values in Corsi and Fenwick are 12.7 and 15.1, respectively, which are also (by far) best on the team.

Which is a fancy stat way of saying that yes, Evgeni Malkin should feel very confident. He hasn't scored a goal in the 2014 Stanley Cup playoffs yet, but his line is dominating the puck and throwing a lot of rubber at Sergei Bobrovsky. Sooner or later they will beat him and the Penguins will be much better for it.