Up 2-1 in their first round series, the Pittsburgh Penguins could either take a convincing lead back home to Pittsburgh for Game 5 with a win...Or end up right back at square one with a 2-2 series that will be very much up in the air. Can the Pens show some killer instinct tonight to push Columbus to the brink?

Infographic, courtesy of Jason Seidling and the Pittsburgh Penguins (click to enlarge) 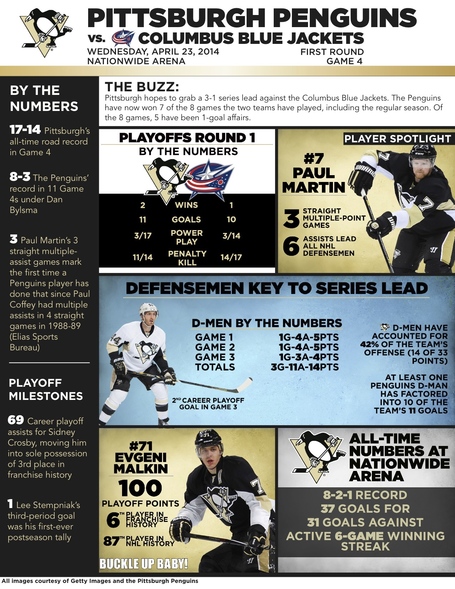 We can assume the likely scratches based on the skaters that stayed out late to keep skating this morning (Taylor Pyatt, Chris Conner, Robert Bortuzzo, Deryk Engelland). Brian Gibbons, who had skated the past two days, was not with the team on the ice this morning and will probably miss his second game in a row with an officially undisclosed (but seemingly a shoulder) injury.

It'll be interesting to see how the Penguins continue to jumble the lines, with Bennett/Stempniak/Glass/Megna all sliding around with the lineup to give the team maybe more skill with Kunitz-Crosby or grit with Sutter or vice-versa. Also will be worth watching to see if the D pair split of last game continues as the Pens try to get Letang going and shield Scuderi from as much pressure as possible.

A look at Columbus

Spirits are still up over at Jackets Cannon, the SBN Columbus blog, where they're hoping to see a bounce back in Game 4. From their preview:

They [The Blue Jackets] did some good things the other night. The PK was good, though forced to be on the ice far too much. They jumped on the Penguins early, and for about 40 minutes they were frustrating the Pens something awful.

But, whether it was fatigue, lucky bounces, adjustments, or mistakes, or a combination of all four (adjustments and fatigue often lead to mistakes, and mistakes often lead to lucky bounces, i.e. you make your own luck), who can say? That said, Monday was a winnable game (much like game 1), and the Jackets hopefully learned something from it with respect to finishing in the playoffs against an experienced team.

I agree that we'll probably learn a lot about Columbus tonight. If they can pull out a win, they'll make the series 2 games to 2 and obviously force at least six games- longer than many pundits who believed Pittsburgh would wrap it up early. The Blue Jackets winning tonight makes it a dog-fight of a three game series, of which the result is unknown.

On the other hand, if the Pens win tonight, they will have won both games in Ohio and really take a stranglehold on the series. It will be set up perfectly for them to go home, brimming with confidence and close out this series and the Blue Jackets' season.

It will be very interesting to see if the Penguins can show that killer instinct and look to really drive home a point that they intend to move on to bigger and better things. A win tonight sets them up for it. A loss means it's all back at square one.

This is the same lineup for Columbus as Game 3, with possibly some in-game forward adjustments of their own coming based on how the game shakes out. The RW spot beside Jenner-Johansen could be in for a rotation if they need a scoring boost.