A detailed look into what was one of the most devastating playoff losses for the Penguins in recent memory.

The way the Penguins lost game four of this series was heartbreaking. A big story coming out of the game was Fleury's performance at the end of regulation and the beginning of overtime. A lot of criticism was deservedly aimed his way. But others pointed out that the Penguins were badly outshot, and that Fleury was the only reason this game was close. Josh Yohe sums up these competing storylines in this tweet:

Before getting to the shot counts in game 4, I want to clear something up: Pittsburgh has been the better team at even strength through games 1-3 this series. Here is the game log from Extra Skater (please click all images to enlarge):

Maintaining possession has not been an issue for the Pens.

Now onto game 4. The final shot count for the game was 46 for Columbus and only 25 for Pittsburgh, which seems like a pretty big discrepancy. A lot of this can be explained by two things though: score effects and penalties. The Penguins were called for seven minor penalties in this game, including one that gave Columbus two full minutes of a 5-on-3 powerplay. But the fact that Columbus could rack up so many shots with so much time on the man advantage isn't that special. To illustrate this point, here is the fenwick chart from extra skater for all game states (including PP time): 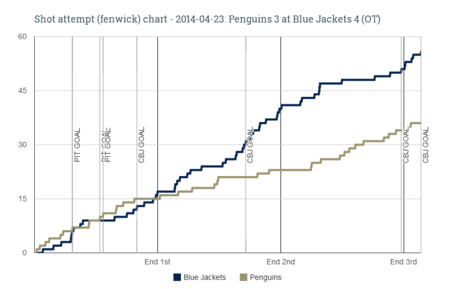 And here is the even strength one: 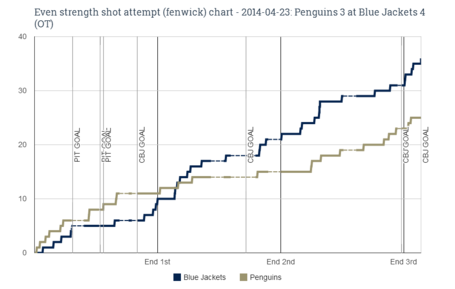 Big difference. This is why people talk about possession at even strength. No one should be congratulated for getting shots while up a man; every team in the league can generate scoring chances given favorable circumstances. What we really want to see is how teams control play when they're at even strength, since that's a more reliable representation of their true talent. The picture in game four thus already looks better when we take out Columbus's PP time.

The gap in shots can also be explained by score effects. Score effects is a concept that describes how teams which are trailing in a game tend to get more shots on goal as the game wears on than the teams who play most of the game with a lead. This difference is generally accentuated as the end of the game gets closer (i.e. we see a huge spike in shot attempts for the trailing team late in the third). Justin Bourne wrote an excellent piece not only explaining the concept of score effects but also how it affects the players. Because the Penguins took a big lead early in game 4, considering score effects is a must.

To mitigate the influence of score effects, we like to look at possession numbers when the score is close -- in other words, when the score is tied or one team is winning by no more than one goal. The resulting figure gives us a rough (but not perfect) idea of which team was able to control play without clouding the picture due to the discrepancy on the scoreboard. With the score close at 5-on-5 in game 4, the Penguins had 14 Corsi attempts for and 15 Corsi attempts against, for a CF% of 48.3%. That's really good, considering that teams trailing by one goal generally only get 46% of shot attempts on the ice. And it certainly doesn't make one think the Penguins played a terrible game.

I want to supplement this data by going back through the play-by-play report and recording Corsi attempts (shots on goal, missed shots, and blocked shots) through each period based on the game state (leading by 1, leading by 2, etc.). I'm only looking at even strength situations here. Below are the results:

The picture from this is pretty clear. Despite having a lead for much of the first period, the Pens played some excellent hockey even though Columbus had more reason to push harder and play desperate. The second period was not good, and it was in a span of about 12 minutes that the Penguins developed the lopsided 16-3 disparity in shot attempts.

The third period was a much better story from the Penguins' perspective. They were able to nearly draw even in possession despite Columbus spending the entire period trailing by a goal. Pittsburgh even held Columbus without a shot on goal for more than eleven consecutive minutes in the third. It was an excellent game plan and it was executed flawlessly. The only problem was Fleury's gaffe at the end. The overall point, I think, is that the Penguins played a great first period and a solid third. The second was ugly, but playing poorly for 12 minutes doesn't mean the goalie can take the night off or escape blame for what happened.

And that brings me to the last thing I want to talk about: the concept of the goalie stealing a game in the playoffs. There's no doubt that Fleury faced a lot of rubber in game 4 on Wednesday night, but if he didn't give up two awful goals at the end of the game, he wins and the team goes up 3-1 in the series. Losing as we did, however, raises a lot of questions about the team mentality, problems in the locker room, the coach's system, and other vague, intangible concepts. Specifically, a lot of people were upset the Pens took their foot "off the gas" and worked to let Columbus back into the game. Tacked onto perceived failures in previous post-seasons, many see this as the steep decline of a once competitive franchise.

To see if this is true, I simply went back and looked at the previous five Cup winners (starting with the Pens in '09) to see if those teams ever got outshot by a decent margin in a playoff game and still managed to win because their goalie was able to steal a game for them. The table below summarizes those games:

Pretty clear that every Cup-winning team had at least one game were they got outshot by a wide margin but hung on to win because of great goaltending. Penguins fans were treated to such an event in 2009 when we beat the Flyers in game 4, so I'm surprised that comparison hasn't been brought up in light of Fleury's performance in game 4 of the Blue Jackets series.

What's the point of all of this? It's that even the best teams which won the Cup had off nights on their way there. Every one of these teams played a game where, going by possession, they didn't deserve to win but still pulled it out because their goalie came up big. The point is that it's incredibly difficult to win sixteen games in the spring if you have to wildly out-possess your opponents every night to have a shot at coming out with a W.

Based on this, I really don't think there's a mental problem with the current Penguins team or a flaw in Bylsma's system. I don't think the players were instructed to sit on a lead in game 4. And I don't think they're lacking in mysterious intangibles that supposedly have such a huge effect on the game but that can't reliably be measured. In game 4 of the PIT-CBJ series, the Penguins played a below average game, one that even the elite teams play every now and then. The difference was that the goalies in the previous examples were there to seal the win. Fleury was not this time around, and his soft goals toward the end of the game cost this team a critical win.

Can the Penguins still win this series? Yes. Could they win the Cup? It's certainly possible. Can you do so without your goalie stealing a game? It's extremely difficult. Fleury is not the only problem with this team, nor is he 100% responsible for the loss in game 4. But he's perilously close to sporting a sub .900 save percentage in the playoffs for the fifth year in a row. If that doesn't change, Fleury will again be one of the big (if not the biggest) reasons for an early playoff exit.