On the biggest game of the season so far, the Pittsburgh Penguins dig deep and get several great performances to outshoot the Columbus Blue Jackets 51-24 and outscore them 3-1. The Pens now have a 3-2 series lead.

It was billed as a potentially career defining game for Marc-Andre Fleury, Dan Bylsma and probably a dozen other players hanging in the balance. The weight of expectations and the fear of losing seemed to paralyze the Pens and only confound their mistakes.

And it could have been the case early in the game when Fleury lunged at a loose puck. It appeared he got to it, but somehow it got jammed out and into the waiting Boone Jenner who had an easy slam-dunk goal.

Down just 1-0 that weight was back, the building seemed visibly tense in the stands with nervous fans. The players shrugged it off and went back to work, widely outshooting Columbus over all three periods. Chris Kunitz would tie the game in the second period, finding a loose puck in front of Sergei Bobrovsky and putting it behind him.

Then in the third period, Jussi Jokinen was the the front of the net and put home another rebound, after some great work from Brandon Sutter and Lee Stempniak.

This time, the Pens wouldn't blow the lead. Kris Letang capped the scoring with an empty netter and just like that, what appeared to be a shaky grasp on the playoffs turned into a pretty solid series lead for Pittsburgh. It was a good night indeed.

A few more thoughts on the game: 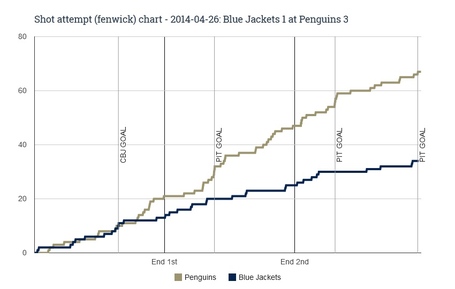 Fancy stat story of the game:

``The Pens absolutely crushed it after Columbus went up 1-0, and just ran away with shot attempts from there on out. We were wondering how the Pens would respond to a Game 4 disappointment, and even after the early hiccup, they answered the bell big time.

Pensburgh Goats of the Game

Not many tonight on this complete effort game where the Corsi total was 82-45 on the night for the good guys. The goal against was pretty bad on Fleury, who could have fallen apart due to it...But he definitely responded and stopped everything else he saw, so good for him.

Now, we head back to Columbus with the first potential elimination game of the season. Expect the Columbus crowd to give the Blue Jackets even more energy as they fight and claw to extend their year. The Pens will probably need their best effort yet in order to end it. Tonight provided a real great place to start.