This series was the first one Marc-Andre Fleury has won since the first round in 2010. Once the Pens achilles heel in 2012 and 2013, Fleury's .943 even strength save percentage in round 1 answered the bell. [Post-Gazette]

The Trib's gamer also heaps praise on the Flower. [Tribune-Review]

Show some love to our friends at Jackets Cannon (the SBN Columbus blog) as they mourn/celebrate the end of a successful season. Always tough to end a season but they and their fans have nothing to be ashamed of, and a lot of bright days in the future.  [Jackets Cannon]

Loved the GIF in this recap of the Fleury save on Matt Calvert immediately following Bylsma's timeout (after the Jackets made it 4-2). Underrated and forgotten moment, because if Calvert scores there, the game would have taken an even bigger turn. [The Pensblog]

Have you heard Sidney Crosby hasn't scored a goal in a while? [PG- Notebook]

Congrats to former Penguin (and all around great guy) Ron Francis for being named the new Carolina GM. The first tip is free, Ronnie: if Ray Shero calls with a trade idea, politely decline. [TSN]

Speaking of old friends, Dustin Jeffrey got waived by the Stars yesterday and could be on his way back to the AHL. [Defending Big D]

The team took a picture with Evgeni Malkin and a "Let's Go Metallurg" sign in the locker room after the game last night. Metallurg is of course the home-town team of Malkin and will be in the Game 7 of the Gagarin Cup. [emalkin71geno Instagram]

It will be a Game 7, because Metullarg lost Game 6 in overtime in a controversial manner. Their head coach, "Iron" Mike Keenan was not impress and chased the refs out. Welp. [Puck Daddy] 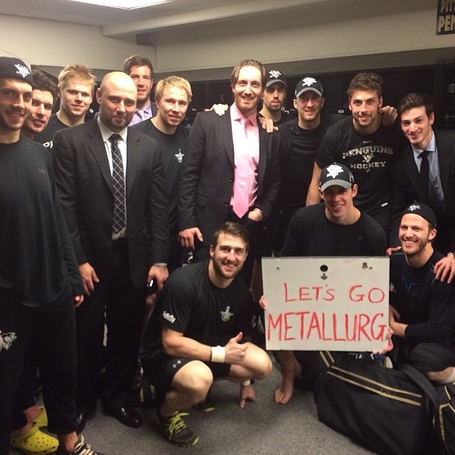