Crosby and Malkin in Terms of Possession are Just Fine

Sidney Crosby and Evgeni Malkin are taking heat for not scoring goals (at least until Malkin scored three last night), but they're dominating possession at a rate we haven't seen them do in the playoffs for the past three seasons. Perhaps they're just fine.

Since the 2011-12 Playoffs when the Flyers ousted the Penguins in six games, Sidney Crosby and Evgeni Malkin have trended upwards in possession. In the recent seris where they defeated the Blue Jackets in six games, Crosby did not score a goal, and Malkin did not score a goal until Game 6, where he had a hat trick. But possession-wise and advanced stats-wise, they're just fine. 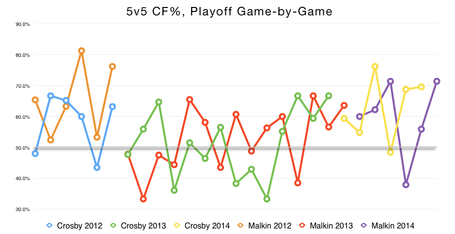 In the Blue Jackets series, Crosby and Malkin's only games sub-50% were Game 4, when they sat on the 3-0 lead and lost the game in OT.

Other thoughts on this:

Advanced stats definitely don't tell the whole story, but looking at their possession dominance, coupled with the fact that they just have to start and keep putting the puck in the net, I will take the odds of Crosby and Malkin coming alive in the 2nd round.
(Chart statistics via Extra Skater)