The beginning of the last road trip of the season for the Pittsburgh Penguins takes them to Winnpeg, so we preview the game tonight against the Jets.

Share All sharing options for: Penguins vs. Jets preview

Credit to the graphic, as always, to Jason Seidling from the Pittsburgh Penguins. 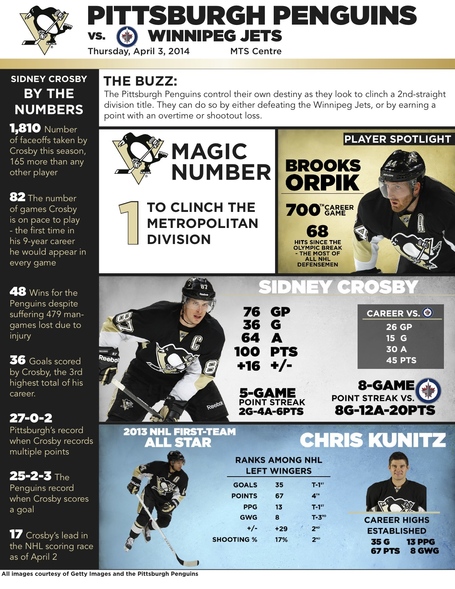 The last and only other time the Penguins and Winnipeg Jets met was back on January 5th, with the Penguins winning a wild 6-5 afternoon game with Evgeni Malkin and James Neal each scoring two goals and grabbing an assists.

Playing a wide-open style is something the Jets and Penguins have done frequently in recent years- since the beginning of the 2011-12 season, Pittsburgh is 5-2-0 versus Winnipeg scoring 32 goals (4.57 per game) to 21 (3.0) for Winnipeg.