The Penguins get back injured defenseman Paul Martin tonight against Winnipeg. Why his return will help Brooks Orpik and the overall possession numbers of the Pittsburgh Penguins.

Share All sharing options for: The Paul Martin effect

It's been made official that Paul Martin will play for the Pittsburgh Penguins tonight, his first return to game action since breaking his hand in the Olympics in February.

Getting Martin back will have a ripple effect that will help the entire team. From Sean Gentille of the Hockey News:

Taking a further look at possession stats, let's look at the following chart from Extra Skater. We added bars in to show: 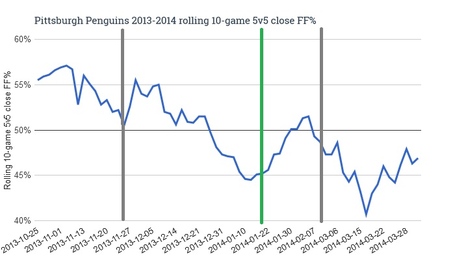 Of course, this chart has to be analyzed with the reasonable and obvious conclusion that one player does not make a team's entire possession stats. There were doubtlessly many other significant factors as the Penguins battled injuries and shuffled several key players in and out of the lineup at various points of the season that altered helped make up this chart just as much as Paul Martin's piece of the puzzle did.

Still, the indisputable fact is that Pittsburgh is a better and deeper with Paul Martin and his presence in the lineup will help the team as the playoffs approach.

The Pens have failed to be a standout possession team this season, and a lot of that burden can be chalked up to the absence of Martin and Kris Letang. who's been out of the lineup since January. These two players are the top minutes playing defensemen on the team, and they're the two guys who are the teams' best puck-moving and skating defensemen (with apologies to Matt Niskanen, who's had a great season, but historcially hasn't been a "top 4" defenseman").

Adding Martin back to the Pens improves the team's possession, skill level and will help at all three facets of play (even-strength, power play, penalty kill). Just a few games out of the playoffs, it can't come at a better time for a team that frankly could use the extra help.