Brandon Sutter and His Linemates

A look into whether Sutter is being dragged down by his linemates.

Share All sharing options for: Brandon Sutter and His Linemates

My timing with this piece is off. I looked at Sutter's numbers following his disappointing regular season to see if his teammates were really weighing him down, but right now his stock couldn't be higher given his play in the 2014 playoffs. I'm happy for the guy--and for the team--since he was a big reason we beat the Blue Jackets in six games. Nevertheless, I think it's still important to make sure we don't let the six games versus Columbus swallow the bigger, 81-game sample he put together before this series started.

This is a big year for Brandon Sutter. He'll be an RFA this summer and it's not clear whether he's the right fit for the Penguins going forward. I've touched on his role with the Penguins previously (here and here), and his status on this team was only made more uncertain given the rumors swirling around him at the trade deadline. A potential package for Ryan Kesler included Sutter as the centerpiece, so we know that management is not terribly confident in Sutter's ability to carry the third line in the future.

Sutter's play during the regular season this year left plenty to be desired. He only scored 26 points in 81 games and he was routinely a minus in possession despite playing against easy competition (generally the bottom six players on the other team). A common counter to Sutter's poor play was the fact that he was generally skating with the equivalent of ham sandwiches for wingers. Our own Mike Darnay recently took a look at this issue and found that Sutter's linemates were, at times, dragging him down.

Though I'm tackling the same question as Mike, I'm going to use some different numbers. First, I want to look at some with or without you (WOWY) stats to see how well Sutter and his linemates control possession when they're away from one another. I pulled these numbers from the hockey analysis database and put them into a series of graphs. The first two graphs compare the production of Sutter's linemates when they're with him to their production when they're away from him. Each player in the graphs below played at least 50 minutes with Sutter and 50 minutes away from Sutter. I also divided the graphs into a bottom six and top six group so that we can get a clearer picture (please click all images to enlarge them): 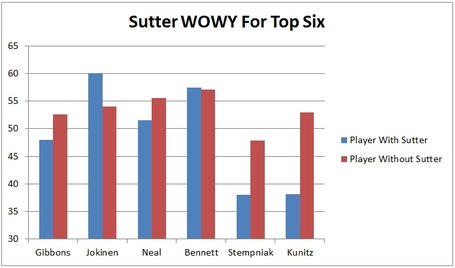 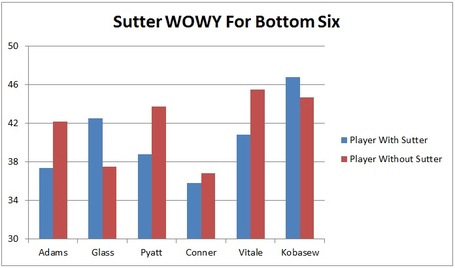 In the first graph, four of the six forwards do better away from Sutter, and Bennett is pretty close to a wash. One thing we don't know though is who they're doing better with while they're away from Sutter. I suspect Jokinen, Kunitz, etc. are playing with either Crosby or Malkin when they're not being centered by Sutter. If that's true, then it's no surprise that they do better away from him since everyone agrees Crosby and Malkin are much better than Brandon Sutter. The main takeaway from the first chart, then, is that Sutter isn't doing anything to distinguish himself, but that's not unexpected given who our first and second line centers are.

In the second graph, four of the six forwards are again doing better away from Sutter. This is a little more concerning because I think it's less likely that these guys are playing with Crosby and Malkin. Craig Adams, for example, would be skating with a fourth line centerman away from Sutter, and generally not as a wing on Crosby or Malkin's line. To be fair, Pyatt and Vitale have spent some time in the top six this year but it wasn't for very long. While it's not unexpected that Neal, Kunitz and Jokinen do better away from Sutter, I'm troubled that so many bottom six forwards follow the same pattern.

I compiled two more graphs using similar data, but this time looking at how Sutter does when he is with and without certain people. 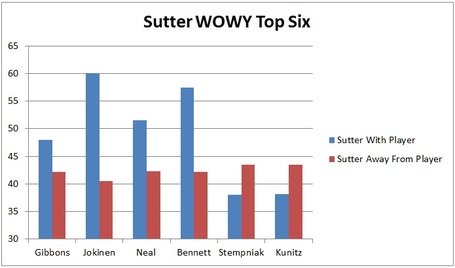 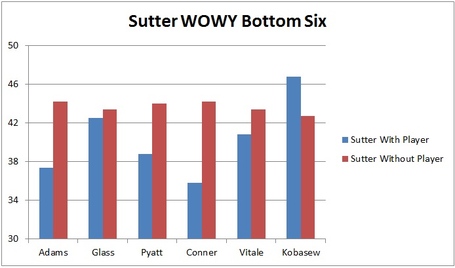 Sort of the same story here. Sutter does a lot worse when he's away from the top six forwards, and he does markedly better when away from some of the worst bottom six plugs like Pyatt and Adams. However, we're still seeing a picture of Brandon Sutter as a passenger--someone who doesn't drive play on his own but rather takes on the characteristics of his teammates.

There's another way, though, that we can look at this question. The ideal experiment would be to give Sutter top six minutes with top six wingers for 80 games and see how he performs. But we don't have the luxury to run an experiment like that, and we honestly wouldn't want to: if Sutter gets extended time in the top six, that means Crosby or Malkin is injured, which hurts our chances of winning in the long-term.

However, we can look at a similar sample from this season, albeit one that is smaller. Malkin missed 22 games this year, and Sutter played in all but one of those games. When Malkin was out, Sutter moved up to the second line and got better linemates in the process. If it really is his bottom six linemates holding him back, then we'd like to see two things from Sutter: (1) and uptick in possession when playing on the second line, and (2) an increase in points. I compiled the data for this analysis using the game logs from Extra Skater. Below is the chart looking at Sutter's points per game as a third liner (with Malkin) and as a second liner (without Malkin). 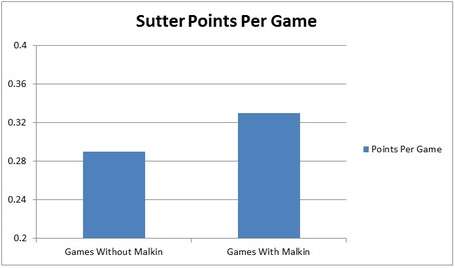 The difference is negligible, but that, in my eyes, is a real problem. In the games without Malkin, Sutter became the de facto second line center, skating more minutes in better offensive situations and doing this with better teammates. But not only don't we see an increase in points per game, we actually see a slight drop. I don't see any evidence here that his linemates are holding him back from putting up more points on the scoreboard. 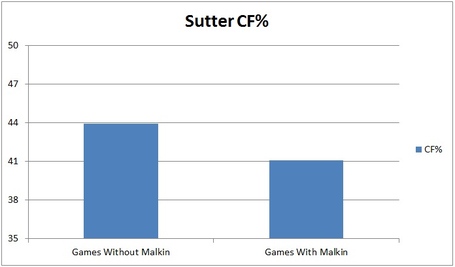 Similar story. Though he sees a slight increase in possession in the games without Malkin, he's still sporting a CF% that is well below 50% despite dramatically better minutes and linemates. If Sutter's linemates were holding him back, we should see a big spike in possession when he gets better minutes. We don't see that, which could very well be a problem.

As I noted in the beginning, Sutter played a really good series against the Blue Jackets. He's had better linemates in the playoffs so far than he had in the regular season, and he's delivered both in terms of scoring and possession. He had five points in six games in the CBJ series and he had a 48.8% CF despite a brutal offensive zone start percentage of 26.2%. That is really, really good.

My only hesitation with Sutter is that he's got a much longer track record of under-performing. He was disappointing in last year's playoffs and he was pretty underwhelming in the regular season this year as well. Based on the data above, I'm not convinced it was his linemates who were holding him back this year. I think it would require a truly heroic performance in the playoffs this year to convince management that the previous 150 games Sutter played with the Penguins weren't representative of his true talent. But if he keeps playing like he did versus the Blue Jackets, the Pens will have to think really hard about whether Sutter can be our third-line centerman going forward.