Is tonight's Pittsburgh Penguins vs. Detroit Red Wings game a look into the future for the first round of the 2014 Stanley Cup playoffs?

Courtesy of Jason Seidling from the Pittsburgh Penguins, check out the infographic preview for the Pens vs. Detroit Red Wings game tonight. 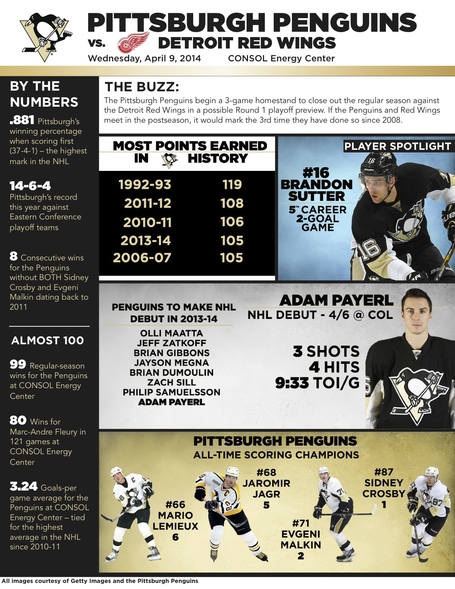 According to Sports Club Stats, there is currently a 57.3% chance in their simulations that the Pens and Red Wings are on a collision course for a first round matchup in the playoffs that begin next week, which makes tonight's game all the more interesting.

The Pens have long been front-runners in the division and haven't had a lot to play for in recent weeks, even though they have seen opponents desperate to make the playoffs. Detroit can clinch a playoff spot tonight with a win, and would be set to play either Pittsburgh or the Boston Bruins, depending on how the remainder of the season sorts out.

This would depend on how the Red Wings do compared with the Columbus Blue Jackets. Columbus is a point behind Detroit, but owns the tiebreaker for having more regulation/OT wins (ROW). So, with a Detroit loss tonight and a Columbus win tonight, Pittsburgh's playoff opponent (at least for right now) would flip to the Blue Jackets.

There is still a chance if the Philadelphia Flyers go on a losing streak that they could fall into the Pens playoff opponent, but that doesn't seem likely. Philly is 2 points up on Columbus, and Philly has the tiebreaker- so only an extreme swing would see a Pens/Flyers first round matchup.

So, it's looking like Pens/Wings or Pens/Jackets. Depending on the results of the game tonight, we could know a lot more.