Get to Know a Ranger: Carl Hagelin

Share All sharing options for: Get to Know a Ranger: Carl Hagelin 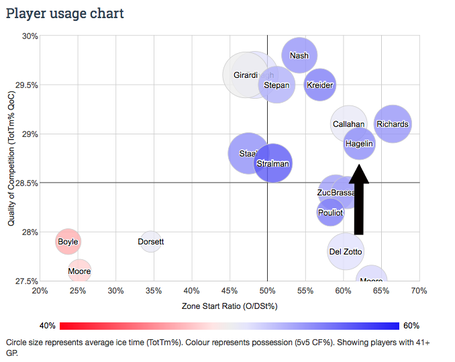 Analysis: Possession numbers are good, on a very good possession team like the Rangers. Looking at what many expected to be a transition year for the Rangers under Alain Vigneault, Hagelin scored 17 goals in 72 games.

Most common linemates: Spent a majority of the year playing with Brad Richards and the recently departed Ryan Callahan. Richards had a reinvigorated season and with a guy like that centering your line, you need to get yourself open and in scoring positions.

Why you should know who he is: He is a small guy, but really quick, and really good hands. Sneaky good, in a way. Could see him scoring some big goals for the Rangers.

How the Pens can stop him: With a fast and skilled guy, gap control is the ultimate key. If the Pens defensemen can keep their gap on Hagelin, you really limit his chances to use his skill to beat you. Staying physical on a much smaller guy is also very important.