Get to Know a Ranger: Mats Zuccarello

Share All sharing options for: Get to Know a Ranger: Mats Zuccarello 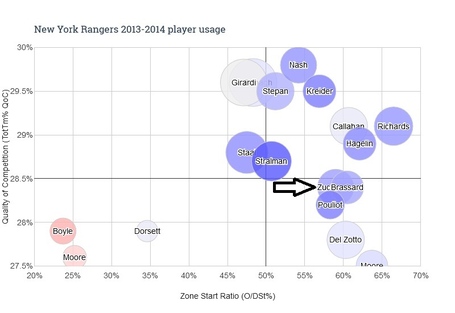 Analysis: This is good coaching by Alain Vigneault. A lot of Rangers have solid possession numbers, and Zuccarello is right in the mix. As a smaller and offensive minded player, he's given lots of o-zone starts and against lesser competition than top line players like Brad Richards and Rick Nash draw. And Zuccarello feasted on it, being a very productive point producer (more on this below).

Most common linemates: His most common linemates this season are the two players that he's currently on a regular line with: center Derrick Brassard and left-winger Benoit Pouliot. Pouliot, like Zuccarello had 2G+2A in the Flyers series, Brassard only went 0G+2A, but one of his assists was a beautiful cross-ice pass that set up Pouliot's goal (which ended up being the Game 7 winner). This trio formed one of NYR's best and most consistent lines in the Flyers series and figures to try and do the same against the Penguins.

Why you should know who he is: Let's start with Zuccarello leading the Rangers in points in the regular season. Not Derek Stepan, not Rick Nash, not Brad Richards. Little Zuccarello was the top scorer for the Blueshirts this year. That, in and of itself, is enough to know who he is. Yes, he's small, but he's also so fast, persistent and skilled that he can be a difference maker in the NHL with the puck on his stick. The Penguins need to go out of their way to be mindful when he is on the ice.

How the Pens can stop him: It's obvious but true, physicality. Every chance that Zuccarello has the puck, especially along the boards, he needs to be finished with a clean check. Even though the Penguins blue-line isn't overly physical, whether it's Matt Niskanen, Paul Martin, Olli Maatta, they need to lean on Zuc hard. The forwards can also help, especially wingers who may pickup Zuccarello in coverage as the play tracks back towards the Pens zone. Hit him, hit him, hit him and don't give him any time or space to create magic.