A Response to Wyshynski and a Note on "Out-Coaching"

A look into the team numbers underlying the New York Rangers series.

Share All sharing options for: A Response to Wyshynski and a Note on "Out-Coaching"

Before the Penguins lost to the Rangers in game seven, Greg Wyshynski wrote an article that was very critical of Dan Bylsma. The article was short on analysis and long on cliches, but I figured that it's still worth a response. One of the points Wysh makes in the article is that the Penguins haven't controlled possession during the regular season like they used to, which he attributes to coaching issues.

And, frankly, [Bylsma's] regular seasons speaks to some disturbing trends: In a league where puck possession is king, the Penguins' corsi numbers in 2013-14 and 2012-13 were mediocre.

Not only is part of the story left out, but what's presented is misleading. As I noted here, the Penguins before the 2012-2013 season were an elite puck possession team under Bylsma. Is it plausible to think that Bylsma stopped caring about possession and instructed his team to play differently? Or did big personnel changes happen between 2012 and 2013? The latter. Jordan Staal was traded and was replaced with Brandon Sutter. The Penguins went from a forward who could skate tough minutes and come out way ahead in possession to a guy who played against bottom six players and got crushed. The numbers were there for anyone who bothered to look.

Losing Jordan Staal wasn't Bylsma's fault, and he did the best he could to adjust to a third-line center who couldn't play shutdown minutes. This year, Bylsma gave Crosby the tough minutes and did his best to shelter Sutter from difficult competition. The Penguins were an elite possession team before the injury bug hit. And losing 530 man games to injuries will diminish any team's ability to carry play for an extended period of time. Quoting the possession numbers for a team this injured makes no sense, unless you try to gauge how they performed when they had a moderately healthy roster.

But now we get to the meat of the story:

If [Bylsma's] seat were any hotter it’d be re-entering Earth’s atmosphere. He’s being out-coached again by Alain Vigneault, as he’s been by everyone from Claude Julien to Peter Laviolette to Guy Boucher in the past.

Saying one got "outcoached" without any serious analysis is lazy. Most hockey fans are aware that teams lose all the time for reasons that have nothing to do with the coach. There were a series of tweets on this point that bear mentioning:

@fearthefin @mc79hockey "outcoached" is a German word for "HOLY SHIT DID YOU SEE LUNDQVIST?"

"Outcoached", without some serious detail, is generally journalistic shorthand for "his team lost."

If Wysh wanted to dig into this issue a little bit, then what metric could we use to evaluate coaches? Is there something a coach has control over and that we know tends to affect the outcome of games in the long run? There is--puck possession. Wysh even agrees with this because he acknowledges that in the current NHL, "puck possession is king." So looking back at the six playoff series the pens have played over the last three years, we can pull the possession data from extra skater (please click all images to enlarge them). 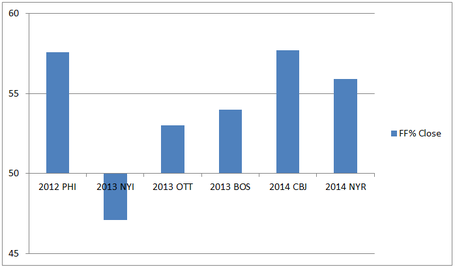 Those are elite numbers. Even very good possession teams don't eclipse a 55% FF% in a playoff series; the Penguins did it three times in a span of three years. What's more, this trend wasn't just from 2012 onward. Gabriel Desjardins counted scoring chances in the Montreal series in 2010 and found that the Penguins were toasting the Canadiens. It was only a hot Halak and a cold Fleury which kept them from advancing. And in the Tampa Bay series--despite not having Crosby and Malkin--the Penguins were a +63 in fenwick and +110 in Corsi over the seven games in that series. Absolutely dominant stuff. So year in and year out, Bylsma had his team functioning like a possession machine when it mattered most - all you can ask for in a league "where possession is king."

So there's no basis for Wysh to claim that Bylsma got out-coached. And yet if the Penguins go deeper in the playoffs next year than they have in the past, it'll be because (1) their playoff shooting percentage got better; (2) they didn't run into a hot goalie; or (3) a combination of one and two. And yet both shooting and save percentage are subject to a ton of variance, especially in small samples, which means the coach can't do a whole lot to correct either one. It would be the height of irony if the Pens don't possess the puck as well next year in the playoffs but advance because they got a better goalie or didn't run cold at the worst possible time.

All of which leads me to two final thoughts. Everyone knows that winning the Cup is hard, but we can make an effort to quantify it. Each series in the playoffs is pretty close to a coin flip, though the elite teams can probably come out as 55/45 favorites against fringe teams. The reason the edge for even the elite teams is so small is that parity is at an all-time high: the best puck possession team this year "only" had the puck 57% of the time when the score was close at even strength.

Let's make a generous assumption for the Penguins this year. Let's assume they're one of the best teams of the last 10-15 years and had a 60% chance to win each series. What's the chance they win four series in a row with those odds? About 13%. What are the chances of the Pens winning four series in a row if they were a 53% chance to move on each series (closer to reality)? About 7.9%. So it's really tough to win the Cup, and you need a lot of things to go your way.

Which leads to my last point. The Penguins have been stymied by hot goaltending a lot in recent memory. They ran into Halak in 2010, Rask in 2013, and Lundqvist in 2014. I understand that many aren't happy with losing in the playoffs and simply saying "nothing we could have done, just a hot goalie." So I thought about who the goalies were that we faced in 2009 when we won the Cup. They were: Martin Biron, a rookie Semyon Varlamov, an injured Cam Ward, and Chris Osgood.

Below is a graph with each of those goalies' regular season save percentage for the three years prior to 2009 (Varlamov was a rookie so he is excluded). I have assumed a league average save percentage of 0.910%. 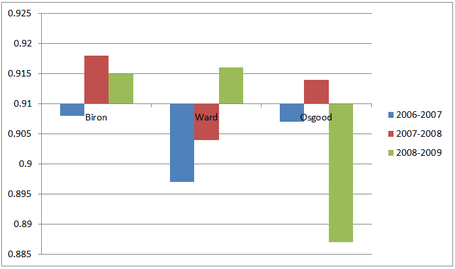 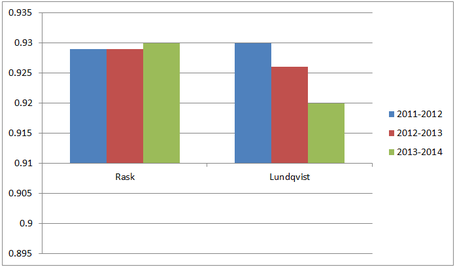 Big difference, obviously. The Penguins won their Cup in 2009 in part because they never had to face a good goalie. The chances of going cold for an extended period of time were thus really small. Unfortunately, they've run into two Vezina-caliber goalies the last two years who got hot and kept everything out of the net. Does it suck? Undoubtedly. But I don't think there are any changes to systems or tactics that can be made to combat this. Claude Julien is considered a much better coach than Bylsma, but his Bruins ran into a hot goalie this year and even he couldn't solve it, despite the Canadiens being a far weaker team than the Rangers.

I'm hopeful that next year in the playoffs, regardless of the coach or the players, the Penguins will get the bounces that haven't gone their way the last few years. Whether it's their goalie getting hot or their opponent's going cold, some good fortune is long overdue.