Get to Know a Ranger: Derek Stepan

Share All sharing options for: Get to Know a Ranger: Derek Stepan 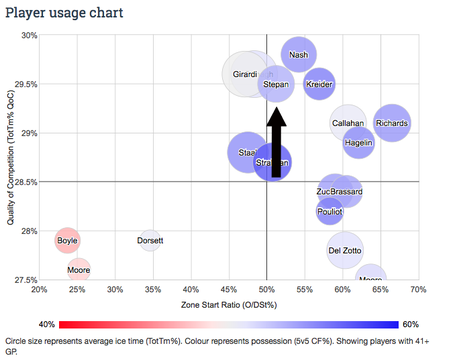 Analysis: Stepan brings really good possession numbers to the table while facing top competition night in and night out, for the most part. He's usually going to be drawing the top pairing in most cases, and rarely drawing the 3rd pairing, other than in the event of a last change at home by Vigneault. His stat line says it all. 17 goals, but 40 assists. The guy loves to dish the puck, but can score too. He's not ultra-skilled, but skilled enough to create on his own, and has a wrist shot capable of putting more than a few pucks in the net.

Most common linemates: Spent a significant part of the year playing with Rick Nash and Chris Kreider (until he got hurt). Since the trade deadline, he has seen his linemates more consistently being Nash and Martin St. Louis. Talk about a line capable of producing in bunches.

Why you should know who he is: He has the capability to get the puck up ice and pass it to Nash and St. Louis, whose track records show that they can score at will. Very dangerous.

How the Pens can stop him: Like any other skilled centers, playing him physical is one key, and the other is locking down passing lanes when available. Nash and St. Louis are guaranteed to get chances. Making Stepan make more difficult plays is the first step in trying to shut that line down. As far as I can see it, shutting them down won't happen, but hopefully they'll be able to minimize the damage.