The Pittsburgh Penguins look to take the series lead in Game 3 in New York. Check out the lines, and how the Rangers fans are feeling today.

Share All sharing options for: Game 3: Pens at Rangers preview

Infographic, courtesy of Jason Seidling and the Pittsburgh Penguins (click to enlarge) 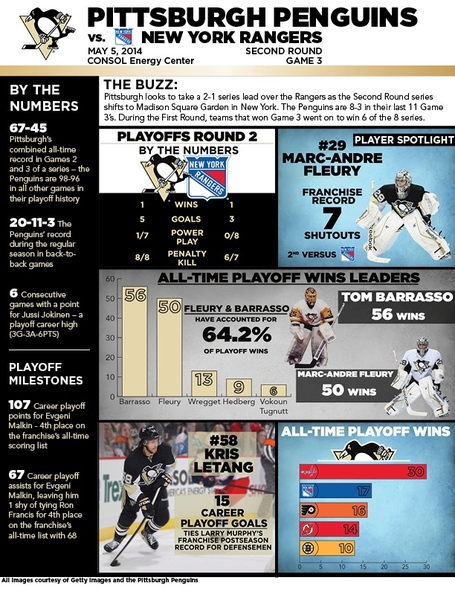 We don't know for sure, but odds are Brooks Orpik will again miss his fifth straight game with an undisclosed (but believed to be lower-body) injury. Orpik didn't skate with the team on Sunday, and there was no morning skate today on the heels of the back-to-back situation with travel in the mix too. No need to change what's working, and Orpik probably needs more time to recover anyways.

Offensively, who knows. Dan Bylsma made a masterful move putting the speedy Gibbons in for Tanner Glass (healthy scratch) and that moved paid off going up against what looked to be a slow and sluggish Rangers team that will be playing in its 6th playoff game in the past nine days.

Keeping the Crosby/Malkin "two-headed monster" together seems like a given, especially since the other lines have been very successful at generating a lot of offense and scoring chances for themselves. But, it's a very fluid situation that could rotate all night, which gives guys like Stempniak and Bennett a chance to play with Crosby, and Malkin a chance to reunite with James Neal. Either way, the lines look great for Pittsburgh right now, and Bylsma is only limited by his imagination of what kind of combinations he wishes to put together.

A look at New York

Over at the Blueshirt Banter, they were searching from some positives and takeaways from Game 2, but didn't find too many:

- Exactly one player showed up on Sunday, and that was Henrik Lundqvist. How good was he? Seriously, could he have played any better? The first goal Dan Girardi scored on his own team. The second goal he had no chance. And the third goal he wasn't even in the net. Bottom line: This was a one-goal game very late in the third because of Henrik Lundqvist. The offense needs to bail him out in a game like that. And they didn't.

- Another bad game from Ryan McDonagh and Girardi. Rangers won't survive many of those.

- Rick Nash was the best (repeat: the best) Rangers' forward, but he has to start doing something on offense. I told you all, I don't care what offense he produces (goals, assists, screening the goaltender, etc.) so long as he's creating it. That's what he's paid for. Offense. Sunday night? He was physical, had a couple of chances but was on the outside far, far too much. Where is the Rick Nash that crashes the net? Where is the Rick Nash who bullies his way into the slot? Without him scoring, this is going to be a tough series. He needs to be better. Plain and simple.

- Bet all of the people who were crying about Nash not scoring enough would have taken a few assists from him last night, no?

- Dan Carcillo was the most aggressive Rangers' forward in terms of going to the dirty areas of the ice. And by that, I mean the dirty scoring areas. That's great to see from him, but a problem in the grand scheme of things.

- Brad Richards should no longer be the conductor of the power play train. He's run his course and whatever magic he had in Game 1 of Round One is gone.

- I've seen some people suggest J.T. Miller for Derek Dorsett and Raphael Diaz for a defenseman. Diaz makes some sense because he can actually run a competent power play. Some are worried about his defensive risks, but I think it's worth the risk. Especially if his minutes are sheltered. As for Miller, I'll take him over Dorsett. If nothing else he provides fresh legs. Maybe that's enough to spark the power play. If not, at least it's something different.

We'll see if the Rangers look to implement any changes. A player like Miller could give the Penguins more issues, and given all the games, maybe they would look to mix some things up.

Still, we should expect a much better effort in Game 3 out of the Rangers than what we saw in Game 2. They'll be back at home, and getting more favorable matchups with the final change. For pride they'll certainly be looking to bounce back and answer the aggression and intensity that the Penguins showed last night in Game 2.