How Often Do Goalies Get Hot in the Playoffs?

Confused, Claude? So am I.

Share All sharing options for: How Often Do Goalies Get Hot in the Playoffs?

I've talked about goalies getting hot in the playoffs a lot lately. Those pieces are here and here. Sometimes our intense focus on only the Penguins' encounters with these creatures makes it seem as if Dan Bylsma is the only coach with this problem. But that isn't true. Since Extra Skater has possession and save percentage data available for each playoff series going back three years, we can pull that information to see how many other teams were able to out-possess their opponent but nevertheless fall victim to hot goaltending.

I've compiled the data in three charts below. There are 45 playoff series in total (15 each year for the last three years). I've included information on which team had the better fenwick close percentage, and which team had the higher 5v5 save percentage. Those series highlighted in yellow are the ones where teams clearly ran into hot goalies and lost. The blue ones are closer to the line since the possession advantage was less obvious. 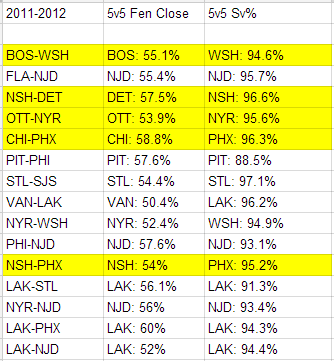 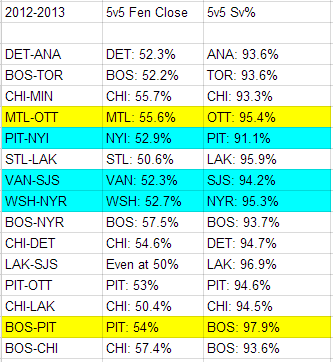 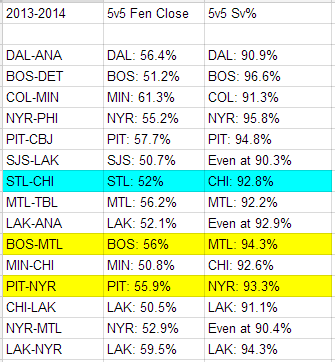 Goalies get hot every year in the playoffs, and it happens to multiple teams playing different "systems." Even if we exclude the series highlighted in blue, we still have 9 out of 45 series where the team which solidly controlled possession was stifled by a hot goalie. That's 20% of the time. If we throw in the blue series that are closer to the line, we get 13 of 45 series, or 29% of the total series played over the last three years. So while this isn't common, it's also not rare.

The tough thing about trying to figure out how likely it is for a series to turn out this way is that not every team is equally susceptible to the "hot goalie" narrative. For this to happen, you need (1) a team which is very good at controlling the puck; and (2) an opponent with a goalie who is legitimately capable of getting red hot over a span of seven games. That cuts out a sizable portion of the field, since not every team is good enough to control possession north of 55%, and not every team has a goalie capable of playing at that high a level. Even if we conservatively estimate that these parameters knock out 15% of the series above, we're left with 38 total series over three years. And with 13 instances of "hot goalies," that means this phenomenon happens about 35% of the time. Hardly an unusual occurrence.

One other thing that goes unmentioned is that when you fall victim to a "hot goalie," it means your own goalie stunk it up. That's because your goalie faced less shots (due to his team controlling play) but allowed more goals than the other guy. This isn't a problem if he's got a long history of elite play during the regular season, or if you're only paying him a couple million dollars. Neither is the case with Marc-Andre Fleury.

I think the conventional wisdom is that Boston has been a more fundamentally sound team than the Penguins the last few years, and that Claude Julien is a much better coach than Dan Bylsma. For the three years that we have data, the Penguins have been stymied by hot goaltending twice in the playoffs despite solid possession numbers. The Bruins? They've fallen victim to this script two times as well.

This was the last thing I would have expected as I combed through the data, but I should have known this just from watching the playoffs the last few years. In 2012, the Bruins lost to the 8-seed Caps despite carrying play, and they similarly struggled this year against the Canadiens. The bigger point that no one talks about, though, is that both the Caps in 2012 and the Canadiens this year were far weaker teams than the ones the Penguins lost to. Over the last two years, the Penguins lost to the eventual Eastern Conference champion. The Bruins, on the other hand, lost to teams in 2012 and 2014 who were woeful at puck possession during the regular season. Despite the much easier road, Boston ran into hot goalies and should have (logically) faced far more intense criticism.

I know some people think there's a secret formula or particular game plan that teams have used to shutdown the Penguins in the playoffs. Claude Julien supposedly knows how to execute this gameplan because he did it to the Penguins last year. But if Julien knows how it works, how come he couldn't beat it in 2012 and 2014? As you can guess, I'm very skeptical there's anything systematic going on. Julien doesn't know anything special, and if he did, he wouldn't have lost like he did in two of the last three years.

But regardless of these playoff losses, Claude Julien is a very good coach. So is Dan Bylsma. The point is that there is no secret to beating a hot goalie in the playoffs. Teams like LA and Chicago minimize the chance they run into these goalies by being very well-constructed, but no one can eliminate the possibility entirely. As long as the Penguins know that--and don't get distracted by character, leadership, or secret game plans--they'll be fine.