A look at scoring chances in the series that saw the Bruins sweep the Penguins.

Share All sharing options for: Revisiting Old Wounds, Part I: The Boston Series

A few weeks ago, I decided to re-watch the entire Penguins-Rangers series from this year's playoffs and track even strength scoring chances. The reason I did this was because people were claiming the Rangers had better scoring opportunities than the Penguins despite Pittsburgh dominating possession. The results showed that, like their possession numbers, the Penguins had the majority of scoring chances in that series.

I've heard similar narratives coming out of the Penguins-Bruins series from last year. Though the Penguins had a 54% Fenwick Close there, many argued their shots were generally garbage chances that weren't prime scoring opportunities. To see if this was the case, I re-watched the entire Penguins-Bruins series and counted even strength scoring chances when both goalies were in the net (i.e. excluding empty net situations). My definition of a scoring chance is in this article. We conveniently don't need to worry about special teams since neither the Pens nor the Bruins scored a powerplay or shorthanded goal in that series.

The chart below contains the scoring chance data for each individual. A glossary explaining each term can be found in my previous article on the subject. 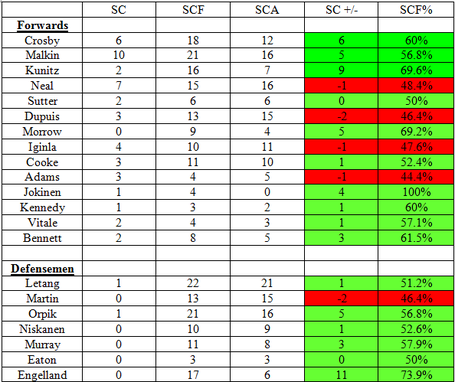 On the whole, there's more green than red, which is always a good thing. As for the defensemen, I was surprised Martin was the only guy in red. Part of that was his deployment (he faced some of the toughest competition on the team and his zone start in the final two games was brutal), and another part of it was that the defense pairs rotated fairly often. I think the lack of continuity in his partner hurt his play a bit. But he nevertheless didn't play as well as he normally does.

Letang's numbers are in line with exactly how I remember his performance. He was dynamic and created a ton of chances, but he gave up an equal amount at the other end because he wasn't that reliable defensively. As for the rest of the defensemen, it was surprising they all had such good numbers. Part of that was usage (Engelland was sheltered, for example), but they all legitimately played good hockey. They certainly weren't the dumpster fires that I and others joked they were during the playoffs.

There's more red for the forwards, but no one is buried too deep. Iginla and Neal I can see; neither are great at defense and spent a lot of time against tough competition skating alongside Malkin. Dupuis was more of a surprise because he's supposed to be a real solid defender. This is some evidence that Penguins fans might be overrating his defensive prowess and exaggerating how much we missed him this year.

As to the positive outcomes, it was nice to see Crosby, Malkin and Kunitz in the green (Kunitz especially so). Malkin was probably the most dangerous offensive forward on the ice; he had nearly twice as many scoring chances against Boston as Crosby did. I was also very surprised that Brendan Morrow was so effective. I would have guessed he had terrible underlying numbers during this series.

Scoring Chances at the Team Level

Below is a chart with scoring chances at the team level for the Boston series.

You can see that the Penguins out-chanced the Bruins over the course of the series. This means that the Penguins weren't limited to harmless shots from the perimeter while the Bruins had unlimited odd-man rushes. The Penguins' 55% SCF also tracks quite nicely with their overall Fenwick Close in this series, which was 54%. Like the Rangers series that I tracked previously, it seems that possession metrics are tightly correlated with scoring chances even in small playoff samples. In both series, each team's FF% only differed from its SCF% by a few percentage points. This is in accord with the general research on the topic, which has found that "tracking scoring chances isn't adding much information to the readily available shot differential numbers."

As I concluded before, I find it tough to imagine there was a serious flaw in the Penguins' gameplan or system that the Bruins routinely exploited. The fact that the Penguins were able to get 55% of the scoring chances against a very good Boston team is impressive. What's more impressive is that the Penguins lost four games in a row. That result will leave a sting regardless of the underlying numbers, and there are no magic words or secret explanations which can point to what the Penguins could have easily fixed. Given their roster, the coaching staff did a good job maximizing the talent they had. If two teams played four games in a row, the chances of one losing all four despite getting 55% of the quality shots are extremely low.

Getting a Better Third Line Center

One thing I noticed when I tracked scoring chances in the Rangers series this year was that Crosby and Malkin were on the ice for a ton of scoring chances against. This is partly a product of their usage; their high ice time and tough opponents mean they'll likely lead the forwards in this category. But being on the ice for so many good chances against was one reason I suggested that Crosby was not as elite as his possession numbers in this year's playoffs suggested.

If you look at the chart above, we see a similar story in the Boston series. Crosby, Malkin, Neal, and Dupuis had the most raw scoring chances against among Pittsburgh forwards. To normalize for ice time, I gathered time on ice stats from extra skater's game reports and came up with each forward's scoring chances against per 60 minutes of even strength play (SCA/60). I left off Vitale, Bennett, Jokinen, and Kennedy because they each only played two games in this series. So we're looking at regular forwards in the chart below, and it's sorted from highest SCA/60 to lowest.

Whereas Crosby had the most scoring chances against among forwards in the Rangers series, it was Malkin and Neal against Boston who were giving up quality chances at the highest rate. And don't forget, Malkin was second in raw scoring chances against versus the Rangers too, so this shouldn't be unexpected. Since we've controlled for ice time, the main explanation now is competition. Those high numbers for Malkin and Neal are driven by the fact that they routinely faced one of Boston's top two lines.

The picture we have, then, is that in the last two playoff years, Crosby and Malkin's talents have been partially neutralized due to the fact that for every chance they create, the opposition almost always creates an equal chance. But it doesn't have to be this way. The easiest way to rectify this is to get a third-line center who can regularly skate against top competition and draw even, or something close to that. If that were the case, then the Penguins could actually get Crosby and Malkin away from the opponent's best without having to worry that our bottom six unit will get obliterated. Even if opposing coaches still fought to keep their top two lines out against Crosby and Malkin, our revamped third line with a new center could take advantage of its sizable edge against the opponent's bottom six players.

We had this setup with Jordan Staal, and it worked out quite well: the team won a Cup and was a possession beast during that time. I don't think Sutter can follow in his footsteps for reasons I've laid out before. Even if you buy that Sutter's teammates held him back this year, remember that he had Cooke, Kennedy, Morrow, Iginla, and Bennett last year in the regular season and the playoffs, and still got crushed. And even this year, we can average his WOWY numbers to see how he did with competent linemates. Sutter spent at least 35 5v5 minutes with Crosby, Malkin, Neal, Bennett, Stempniak, Megna, Dupuis, Jokinen, Gibbons, and Kunitz this year. His average CF% with that group was 44.5%. Not good. He spent at least 50 5v5 minutes with Neal, Bennett, Stempniak, Megna, Jokinen, Gibbons and Kunitz. His average CF% with those players was just 48%. This isn't a teammate problem.

Losing Staal forced Crosby and Malkin to skate power v. power in every game, especially in the playoffs. They can handle these minutes, but it minimizes their talents. Their biggest asset is (and has always been) their offensive potential, and that's maximized when they get to start a lot in the offensive zone and skate against third-line players. Having to always use them against the opponent's best means they spend more time in the defensive zone--where they aren't the strongest--and continue to let up a high rate of quality chances against. This is why I'm a big advocate of trading Sutter. Getting someone better would free up a lot of space for Crosby and Malkin, and that's the easiest way to ensure they dominate in next year's playoffs.