Do players really score less when they join the Nashville Predators?

With the James Neal trade, a number of questions are looming over the Penguins. The first is why they got Nick Spaling. As Adam Gretz highlights, he has woeful possession numbers:

Sure he plays on a bad team, but look at his CF% rel numbers, which control for team effects. You'll notice they're all negative, meaning he's a very bad player even after controlling for his bad team. He also doesn't score a lot, and got some of his points due to powerplay time that he won't get in Pittsburgh, as well as a 15% shooting percentage that is almost certainly coming down.

Because of this, I keep my sanity by viewing this as a one-to-one swap of Neal for Hornqvist. Hornqvist has better offensive numbers and some decent possession numbers as well. Though the return should have been more, a common retort amongst those pleased with this trade is that Nashville stifles offense, and that we should expect Hornqvist to score a lot more with the Penguins.

There's a twitter user named Jason who is a Penguins fan and an absolutely marvelous follow. If you're not following him, stop what you're doing right now and follow him. The reason I bring this is up is because he wondered aloud whether and how much Nashville stifles offensive creativity. This got me thinking that we could compare the offensive numbers for players who spent time in Nashville and then were traded or signed with other teams. I wanted to make sure the samples were big enough, so I found four players that made sense: Mike Fisher, Sergei Kostitsyn, Joel Ward, and former Penguin Steve Sullivan.

First, let's start with Fisher. He played 11 seasons in Ottawa (during the time when they were really good too) and just finished his fourth season with the Predators. Below is a chart comparing his goals and points per game in Ottawa and Nashville (please click all images to enlarge them). 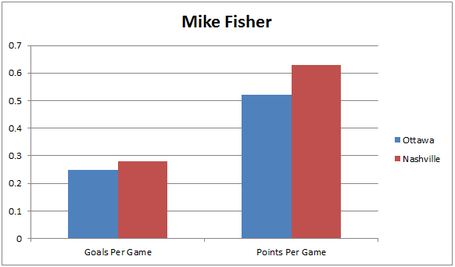 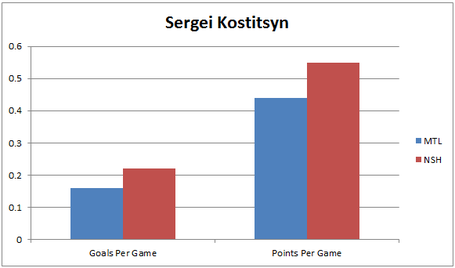 Here is the chart for Joel Ward. 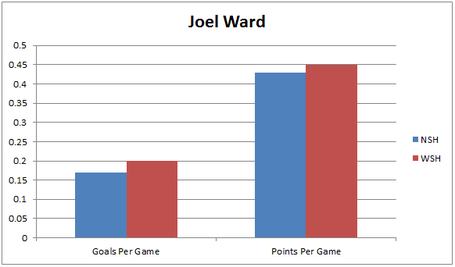 Here we see our first glimpse of an uptick in goals and points away from Nashville, but the increase is slight. It also isn't a matter of increased ice time; Ward sees his 5v5 points/60 and goals/60 also rise while in Washington.

Lastly, we get to the most interesting player in Steve Sullivan. Sullivan came from Nashville to the Penguins for a year and spent a ton of time with Evgeni Malkin. So this is as close as we can get to a controlled experiment to see how much of a bump a player gets coming from Nashville to play with Malkin in Pittsburgh's system. Sullivan's chart is below (note I excluded his last two years with Phoenix and New Jersey because he didn't play many games with them). 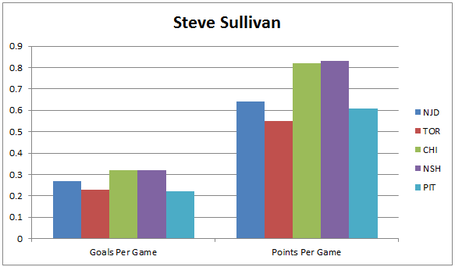 Well that's not great news. Sullivan matched his career high in goals per game in Nashville and then saw them drop when he came to Pittsburgh. Likewise, he had his highest points per game in Nashville but those dropped precipitously when he came over to the Penguins. Sure he was a year older, but we're assuming that Malkin provides a huge boost to everyone. This also isn't affected by ice time. Sullivan scored 0.74 5v5 goals/60 and 1.7 points/60 in Pittsburgh but scored 0.63 goals/60 and 1.88 points/60 in his final four years in Nashville.

Based on the jump in his goals/60 in Pittsburgh, I can see him getting a slight bump from Malkin. His numbers with his final year in Nashville were below his average because he only played 44 games due to an injury. But in the year before (when he was 35, so still old), he scored at the same rate in Nashville as he did in Pittsburgh. I don't think age is that relevant in this case.

Overall, Nashville is not a place where offense goes to die. Grinders like Joel Ward score at nearly the same rate once they leave Nashville. Even an "enigmatic" offensively-driven Russian like Kostitsyn flourished in Nashville compared to Montreal. And a legitimately good player like Mike Fisher actually put up better offensive numbers in Nashville despite playing in Ottawa during his prime. Plus, we got to see the Nashville to Pittsburgh experiment with Steve Sullivan, and a generous interpretation is that his numbers with the Penguins closely tracked his career average in Nashville.

Is it possible Hornqvist achieves career highs with Malkin? Of course. But the data above shows that players who played a number of seasons in Nashville and also played multiple seasons with other teams don't put up numbers that are all that different from their averages with the Predators. So I don't think there's a Nashville effect limiting their chances. The Predators' good players do well, but because of an internal budget, they can't afford enough good players.

Let's assume everyone plays 82 games. Based on his career rate in Nashville, Hornqvist will score 24 goals and 49 points. Based on his career rate with Pittsburgh, Neal would score 37 goals and 76 points. So it would take Neal only 53 games at his career rate to meet Hornqvist's totals, meaning he could miss 30 games for whatever reason and still put up the same numbers. However, we can grant a bump to Hornqvist, but he'd need to increase his goals per game by 54% and his points per game by 55% to reach Neal's numbers. We haven't seen any forward with a big sample leave Nashville and witness a jump that big, including Steve Sullivan.

That doesn't mean I'm 100% certain Hornqvist won't become a 35-goal, 75-point guy. I just think it's pretty improbable. Will Hornqvist make it up with defense? Tough to say, but he and Neal had a similar PDO this year but a GF% significantly in Neal's favor. Hornqvist will likely be better with Malkin, but I don't think it's likely he scores more than ~60 points in 82 games. If that turns out to be true, I don't see how this trade made the Penguins better.