A look at the combined playoff save percentage for each team over the last five years, and where the Penguins (and Fleury) rank.

Share All sharing options for: Combined Playoff Save Percentages 2010-2014

I've been writing a lot lately about what happened to the Penguins in the playoffs the last few years. Generally speaking, the Penguins always found a way to out-shoot and out-chance the opposition but still came up short. Part of the explanation is the opposing goalies playing really well, but the necessary implication there is that your own goalie kept coming up short. Fleury has gotten plenty of grief for his playoff performance the last few years, but in this article, we're going to quantify just how bad it's been.

I went through the data on the NHL's website and calculated the combined playoff save percentage for every team who played at least one playoff series in the previous five years (2010-2014). I excluded empty net goals from the totals to ensure they don't skew the results. The table is sorted from highest save percentage to lowest.

There's some interesting stuff in here, but we're going to focus on the Penguins. You'll notice where they are: fourth from the bottom. The only teams who put up a worse playoff save percentage over this time were teams who played one series. The limited size of those samples contributed to their numbers being so low (Kari Lehtonen, for example, isn't an .880 goaltender). So what does that mean? Among all teams in the NHL who played more than one playoff series in the last five years, the Penguins (and Fleury) are dead last in terms of save percentage. If you took out Voklun's solid performance from last year, their numbers would be even worse. And to pile on, notice where the last two teams to eliminate the Penguins from the playoffs sit on that chart (hint: at the top).

Now perhaps Fleury was peppered with shots in the playoffs and became easily rattled. Save percentage is not dependent on shot volume (GAA is though), but I'm thinking that if Fleury was under siege most of the time, perhaps we could excuse some of his poor performance. The chart below contains each team's five-year combined shots-against per game in the playoffs, sorted from lowest to highest (please click to enlarge). 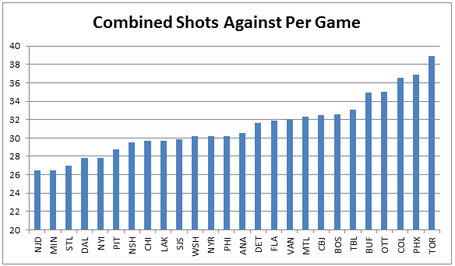 We're left with a pretty clear picture here. In the regular season, Fleury's career numbers are decidedly average. In the last five playoff years, the Penguins (with Fleury in net 90% of the time) have gotten awful goaltending. There's no evidence that players are "clutch," and I likewise doubt there's any evidence of "anti-clutch" behavior where players choke under pressure. But Fleury comes as close as anyone. Any sane person looking at this data should have zero confidence that Fleury can give you even league average goaltending in next year's playoffs.

I gather that Fleury supporters would likely argue it was the system he played in that led to his disastrous numbers. Despite the low number of shots against--the argument goes--the Penguins gave up a much higher proportion of high quality chances than other teams. The problem with this argument is that there's no evidence for it. We know that counting scoring chances doesn't add anything to possession numbers, meaning we don't see any teams controlling play but giving up a ton of quality shots against. Gabriel Desjardins also did a review of shot quality and concluded:

Bottom line: shot distance/location/quality is just a tiny sliver of shooting percentage (both for and against.) When you factor in the 33% regression to the mean we see in odd and even samples, shot quality accounts for just under 10% of team shooting percentage.

And Eric Tulsky looked at six years of data and found that players have basically no effect on save percentage. So there are no teams or systems that are systematically and repeatedly getting higher quality shots on average. Teams which get heavily out-possessed aren't cleverly sitting back and waiting for their repeated breakaways; they're playing terrible hockey, and if they're winning, they owe it all to the guy between the pipes.

But hey, we're not nerds here, so let's throw the stats out the window. I and others have actually gone back and Watched The Game™ to track scoring chances in the series where the Penguins lost to hot goalies. In 2010, Gabriel Desjardins found that the Penguins nearly doubled the Canadiens in scoring chances, so it was Halak--and not Fleury--who was facing the barrage of quality shots. Last week, I counted scoring chances from the Boston series in 2013 and found that the Penguins again had more dangerous shots than the Bruins (though Fleury was only in for part of game 2). The same was true against the New York Rangers this year.

Even if you still don't believe me, how do you explain the difference between Vokoun and Fleury last year? Fleury had given up 14 goals in three games against the Isles and was on track for another Philly meltdown. Then Vokoun came in and put up great numbers. Neither the system nor the players changed. Only the goalie did.

Some people have mentioned that even when the Penguins were winning this year, things didn't feel right. More broadly, everyone is wondering how a team with Crosby and Malkin has failed so often in the playoffs the last five years. There are a number of reasons why, but the data above points to Fleury as the chief culprit. Ignoring teams which have only played in one playoff series over the last five years, the Penguins have had the worst goaltending in the NHL playoffs. You cannot win, Crosby and Malkin notwithstanding, when the guy between the net routinely collapses.

Fleury is set to make $5 million next year. His average goaltending in the regular season costs less than half of that. And his terrible goaltending in the playoffs should be free. The Penguins need to move mountains this summer to trade Fleury because he's been the biggest thing holding this team back from continued playoff success.