The Pittsburgh Penguins might finally make a return to "real" gold in their 3rd jerseys soon. Their regular jerseys will remain the same, but a new alternate sweater should be back next season. 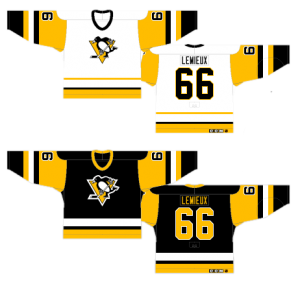 Good news for a change regarding the Pittsburgh Penguins: the oft-rumored jersey change may be coming. From Rob Rossi at the Trib:

Note: The Penguins expect to introduce an alternate jersey to be worn for select games next season. One confirmable detail about the third jersey is the return of Pittsburgh Gold to the team's uniforms for the first time since 2001-02 season. Goalie Marc-Andre Fleury said he has ordered yellow leg pads and gloves to be worn when the Penguins' don the alternate jerseys.

The Pens have long been rumored to be making a return back to the traditional "Pittsburgh gold" (aka yellow, I suppose) that was last worn regularly in the hey-day of Mario Lemieux. The team has drifted to "Vegas gold" and then having blue jerseys as throwbacks in recent years.
For more jersey talk - be sure to check out this Penguins "worst to first" jersey rankings from April on Pensburgh, a unique look at all the different sweaters the Pens have donned over the years.