How does a forward's usage affect his on-ice shooting and save percentage at even strength?

Share All sharing options for: Forward Usage and PDO

But if that were so, why is he paid so little? Why are his possession numbers so bad? Why does the eye test make him look so bad? More importantly, why isn't every team lining up to snap him up from us? In addition to these questions, we should always be skeptical of goal-based stats (even over big samples) because it takes such a long time for the signal to separate from the noise. 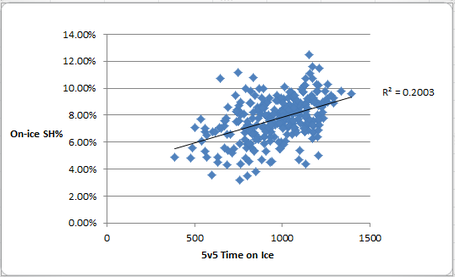 There's definitely something there. An R-squared of 0.2 or more is a moderately positive relationship, but I'm inclined to give it more effect here because we can't control for as many things in hockey. So my takeaway is that there's substantial evidence for the claim that players with more ice time generally have higher on-ice shooting percentages. 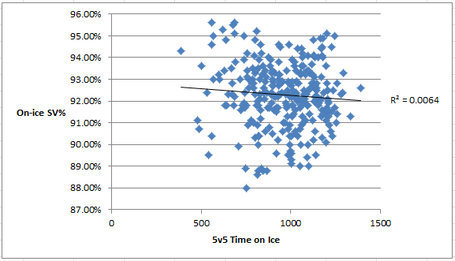 Nevertheless, I wanted to break things down on an individual level. Over the last three years, Brandon Sutter averaged a time on ice QoC% of 28.2% and an on-ice save percentage of 93.7%. That QoC is really low; if you break down the QoC among forwards this year into quintiles, Sutter's QoC puts him in the bottom 20%. Guys who see competition that easy are, by definition, skating against guys who don't see much ice time. We know from above that guys who don't play a lot have a low on-ice shooting percentage, so perhaps at the extreme, guys with very easy competition have high on-ice save percentages.

To figure this out, I went through all of the forwards who played at least half the games in each of the last three seasons and recorded each one who (a) had a time on ice QoC% of 28.2% or below each year (Brandon Sutter's three-year average), and (b) had an on-ice save percentage of 93.7% or higher each year (again, Sutter's three-year average). The list of guys who did this all three years and two of the three years is below.

You'll notice how aggressively unimpressive this group is--there are some real duds there in Ryan Jones, Mike Rupp, and Aaron Volpatti. I also don't even know who Brian Flynn is. And keep in mind, there were equally low-quality hockey players who didn't make the cut because their on-ice save percentage was a tad off. The list would thus be bigger and even more bland if we broadened our parameters just a bit.

But look at those three names who did it all three years. John Mitchell is a decent guy who has bounced around from the Leafs to the Rangers and now to the Avalanche, all on short deals that paid little money. Trevor Lewis has been with the Kings' organization his whole career but has been relegated to short contracts in six figures. And Shawn Thornton is an awful hockey player who assaults people on the ice (note that while we're on the topic of useless enforcers, Sutter's "defensive prowess" is shared by Colton Orr and Cody McLeod, two face-punchers who should not be in this league).

The point? Sutter isn't a unique defensive asset. When you actually look at players who routinely see the light competition he's faced the last three years, a chunk of them have high on-ice save percentages over one, two, or three years. GMs don't invest much term or money into these guys, and both stat heads and casual fans recognize that these players are not very good. If we thought their high on-ice save percentage was a product of innate talent, then GMs would be sitting on a pool of seemingly elite shutdown players who are underpaid and vastly undervalued.

I don't think that's true. When you get into the bottom 20% of players in terms of quality of competition, things change. Their opponents get little ice time because they're offensively challenged, which we see at the left end of the first graph above. The fact that their goals against numbers are good isn't because of their talent but rather their deployment. So if most players can provide "good defense" against weak competition, the key is to get guys who are cheap possession-drivers. Sutter is neither, which means Jim Rutherford needs to find a way to trade Sutter before October 9th.