A look at how often the depth players on the best teams are scoring goals at even strength.

Depth at the forward position has been a topic of conversation for Penguins fans. There were stretches last year where the Penguins did have issues icing a competent bottom six unit, and a lot of praise for Jim Rutherford this summer has been due to shrewd acquisitions that have improved this team's complement of forwards.

There's no doubt that the Pens' depth wasn't optimal, but an issue I've been thinking about lately is how significant those problems really were. I've written previously that the Penguins' depth wasn't an issue in the playoffs this year. I also looked at how the team performed when both Paul Martin and Kris Letang were in the lineup during this past regular season, and I found that the Penguins played like an elite possession team when those two were healthy. That was true even when we iced a bottom six unit that featured Glass, Adams, Vitale, and Pyatt.

Nevertheless, Tyler Dellow wrote an article many months ago about the depth of certain elite teams and came up with numbers that showed that Pittsburgh woefully under-performed in this regard compared to its peers in the standings. That article has since disappeared, along with his site, since Tyler has been hired by the Oilers. But if I remember correctly, he used GF% and CF% to isolate when certain top six players were and weren't on the ice. Because CF% and GF% numbers are on-ice numbers, you can't simply add them up, as you risk double-counting them. I believe Dellow used a script to pull these numbers directly from the play-by-play reports to avoid double counting them.

The main issue I had with that analysis was that the Penguins were badly injured this year, and those injuries caused everyone's GF% and CF% numbers to drop. There's substantial evidence for this in the Martin-Letang article I linked to above, which highlights that the team and the individual players were doing much better possession-wise when those two were in the lineup. Additionally, the Penguins lost Beau Bennett, Pascal Dupuis, James Neal, Evgeni Malkin, and many others for long stretches last season. Our best depth forwards had to routinely jump up the lineup to fill in for those players, leaving our bottom six lines composed of waiver-wire pickups and AHL players.

Indeed, when the Penguins were mostly healthy in the playoffs this year, their forwards did alright (please click image to enlarge it).

Based on this, I decided to look at even strength goal-scoring for the previous regular season (13-14) and see how "top-heavy" the Penguins really were compared to other elite teams. To do this, I took every forward on extra skater who scored an even strength goal for his team this year and sorted them all by even strength TOI/60. Since goals are individual stats, there's no need to worry about double-counting. I then split that group in half, with the bottom half comprising the depth forwards.

For example, if a team had 14 forwards score an even strength goal, the bottom 7 guys in TOI/60 were depth players. If a team had an odd number of skaters, such as 15, I took the eighth forward (who is in the middle of those two groups) and split his goals evenly between the top and the bottom. Only three teams had this issue, and all of those guys scored an even number of goals, resulting in neat splits between the top half and bottom half units. The chart detailing the percent of goals scored by the top half and bottom half is below. 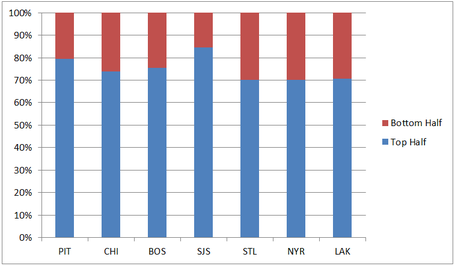 You can see that the top half of of each team scored between 70% and 80% of the total goals at even strength. This is both intuitive and informative. The top half players get more ice time, more offensive zone starts, better teammates, and have more talent. What this suggests is that "improving" the bottom half of one's lineup won't have a big effect when it comes to goal-scoring since most of that comes from your traditional top six players.

Pittsburgh relies slightly more than others on the top half of its lineup for goal-scoring. But you'll notice that they're not the most top-heavy in that regard--that title belongs to San Jose. While Pittsburgh is always referred to as the ill-constructed top heavy team whereas San Jose is an elite contender, looking at who scores the goals for each team tends to chip away at that narrative.

I also wanted to look at goals scored using a traditional top six unit. So for each team, I sorted every player who scored an even strength goal by even strength TOI/60. I then took the six players with the highest TOI/60 and who also played 40 or more games this year and labelled them the top six. Everyone else was considered a depth player. The chart with that information is below. 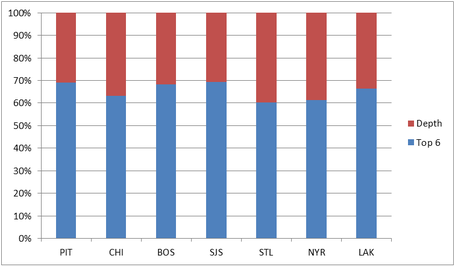 This time, teams are clustered between 60% and 70%, but there's still little differentiation. Goal-scoring is a top-heavy enterprise for every team because of the same rationales mentioned above. Pittsburgh is a bit higher than others in this regard, but still in line with Boston and Los Angeles. And San Jose again leads the group as the most top-heavy unit in terms of goal-scoring.

I think there are a few takeaways from these charts. First, either Pittsburgh isn't as top-heavy as some people think, or most of the elite teams are nearly just as top-heavy. The differentiation in goal-scoring between the top and bottom units of each team was similarly spread out in each graph, and Pittsburgh wasn't even the most lopsided team above.

Second, using on-ice numbers like CF% and GF% to evaluate forwards can be terribly misleading without accounting for injuries. We know that even Pittsburgh's bad depth players were doing much better when Paul Martin and Kris Letang were in the lineup. And we know that injuries to Bennett, Dupuis, Kobasew, Gibbons, Malkin, Neal, etc. forced our best depth players to often move up the lineup and leave us exposed when it came to the bottom six forwards.

Finally, to the extent Pittsburgh's "depth" this year was a problem, fixing it won't change the results that much. All of the elite teams dole out ice time in a way that means 6-7 forwards will score the overwhelming majority of goals at even strength. Improving depth is fine, but doing so while the top six gets worse could be a bigger problem since that is the unit that needs to carry goal-scoring at even strength.

There are question marks in the Penguins' top six right now: how healthy/effective will Bennett and Dupuis be? How well will Malkin and Hornqvist mesh? Can Crosby and Malkin keep carrying players who don't do much to help themselves? And things will get even trickier if there's an injury epidemic next year. But this is all just possibility at this point; it's plausible to imagine that the Penguins will have few injuries and lots of players with career numbers next year.

I do think, though, that this is another data point that highlights we tend to focus disproportionately on depth forwards in evaluating a team despite their limited ice time and contribution to goal-scoring. Improving depth is always a good thing, but doing that while your top six remains stale can become a problem.