Winning Faceoffs on the Powerplay

A look at how important it is to win draws on the powerplay and what that meant for Sidney Crosby in this year's playoffs.

Share All sharing options for: Winning Faceoffs on the Powerplay

Earlier this summer, I wrote an article about the Penguins' powerplay versus the New York Rangers in this year's playoffs. I tracked a few stats that aren't recorded by the NHL (like zone entries and wall battles) to get a better idea of what went wrong on the powerplay. One thing I mentioned in that article was that in the future, I'd take a look at how important winning faceoffs on the powerplay is to maintaining possession and scoring goals. That is what I want to do in this article.

Extra Skater has individual faceoff wins and losses on the powerplay in its standard report. To get team data, I simply added up the individual faceoffs for every player on each team to come up with each team's faceoff winning percentage (FOW%). I then created scatterplots to test the relationship between FOW% and Shots For/60 (SF/60), Fenwick For/60 (FF/60), Corsi For/60 (CF/60), and Goals For/60 (GF/60) while on the powerplay. To be clear, the data is from this past regular season (2013-14) and includes all powerplay time (5v4, 4v3, and 5v3).

As an initial matter, the spread in FOW% on the powerplay among the 30 teams was not large. This year, the Penguins had the best FOW% on the PP at 59.45%, and the Devils had the worst mark at 48.36%. That difference of slightly more than 11% isn't that big, and it's only a bit more than the difference we saw in overall FOW% in the NHL this year. The fact that the gap between the best and worst team was so small makes me think that winning faceoffs aren't that important to a successful powerplay.

Nevertheless, the scatterplots are below. 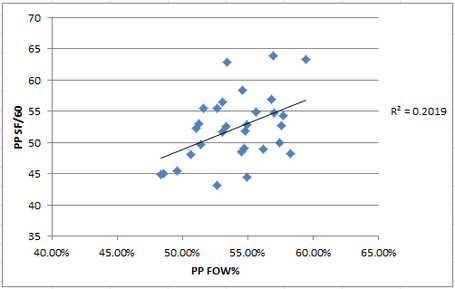 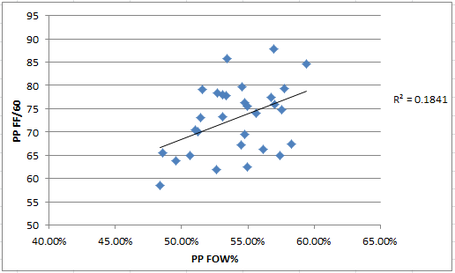 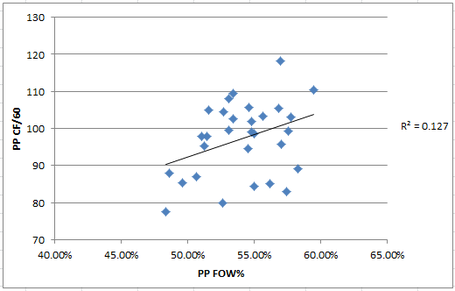 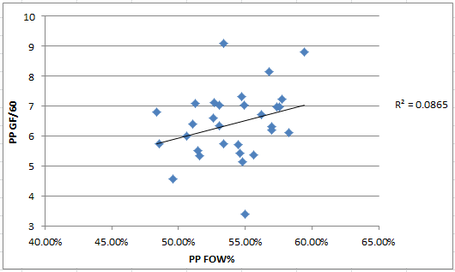 What we see at the top is that winning faceoffs on the powerplay seems somewhat important to generating shots on goal and missed shots on the powerplay. An R-squared of around 0.2 indicates a moderately positive relationship, which tells us that the more faceoffs you win, the more unblocked shot attempts you can generate. The R-squared isn't that high because there are undoubtedly other things going on that lead to shot creation. But given that each of those graphs crosses, or is near, the 0.2 threshold, I think we can say that winning faceoffs on the powerplay is not insignificant and shouldn't be ignored.

What's interesting is that the R-squared gets worse when you look at CF/60, and it's close to 0 when you look at goals. The correlation between FOW% and GF/60 doesn't worry me because I'm only looking at one season's worth of data. Like at even strength, goal-scoring fluctuates wildly on the powerplay, and since the powerplay is an even smaller sample, you introduce more randomness into the equation. The most reliable indicator of PP success in the short term (i.e. less than multiple seasons of data) would be shot metrics. And FOW% seems to correlate moderately well with shots on goal and missed shots.

I can't explain or figure out why the R-squared drops for Corsi, though. Going back and watching a ton of tape would likely provide an answer, but that's a huge investment that I can't personally do right now. So suffice it to say that while winning faceoffs seems to be a non-trivial factor in generating unblocked shots on the powerplay, it's not important if you add in blocked shots to look at all shot attempts.

I want to tie this into the New York Rangers series in the playoffs this year. Before I ran these correlations, I noticed a few months ago that Crosby's FOW% on the powerplay in the playoffs this year was really low. Hooks Orpik spoiled the surprise in the comments to my last piece on this topic. To see just how low it was, below is a list of all forwards who took twenty or more faceoffs on the powerplay in this year's playoffs.

You can see that Crosby is third from the bottom of the list at 46%, which, no matter how you slice it, is not good. To put that another way, Crosby had a 60% FOW% on the powerplay during the regular season this year. He took 62 faceoffs on the powerplay in this year's playoffs. He only won 29 of them, but had he performed at his regular season rate of 60%, he would have won 37, or eight more.

That translates into 8 more opportunities where you start with possession on the powerplay in the offensive zone. There's no guarantee you get a scoring chance or a goal from any of those, but simple odds would suggest that at least one of those extra opportunities would amount to something. Just one extra PP goal could have won the Penguins game 1, made them more competitive in games 5 and 6, or tied game 7.

Of course we can't say any of this for sure. But this is one facet of the game where Crosby faltered in the playoffs. That doesn't mean we trade him or question his leadership. But I think in combination with my last article on the Penguins' powerplay in the playoffs, it highlights a few of the elements on the powerplay where Crosby wasn't at his best. And being the best at these marginal things is something Crosby is known for, and the teams that go deep in the playoffs do the little things like that very well.

All that being said, Crosby's FOW% on the powerplay wasn't a huge deal, and it doesn't take away from his otherwise impressive playoffs where he was able to possess the puck at an insane rate despite really tough minutes. This article is only a small look at a distinct aspect of the powerplay that helps explain why, to my eyes (and others), something seemed wrong with the PP in the playoffs.