Using zone entry and zone exit data to evaluate players is the next step in hockey analytics. This is based on the work of Eric Tulsky, who found that teams generate more shot attempts by carrying the puck into the offensive zone. Likewise, defensemen who limit the number of times opponents carry the puck into the offensive zone keep shot attempts against down, and thus boost their team's possession numbers.

David Johnson wrote an interesting article the other day on zone entry/exit data. He looked at a team's carry-in percentage differential, which measured how often a team was carrying the puck into the zone versus how often they were letting the opposition carry the puck in against them.  He found that a team's net carry-in% differential was more predictive of the team's final number of standings points than CF%. The caveat to this is that the data he was working with was only about 60% of the prior season, so it's possible that the predictive power of net carry-in% is overstated for now. Nevertheless, this finding is still fascinating to me.

I've mentioned before that Corey Sznajder is watching every game from last year and tracking zone entries and zone exits (plus a host of other stats). Please consider donating to his project here. He tweeted a chart to me the other night which had the carry-in% percentage (or how often each dman let the opposing forward enter the offensive zone with possession) for all Penguins players this season. Corey has tracked about 60% of the games from last year. 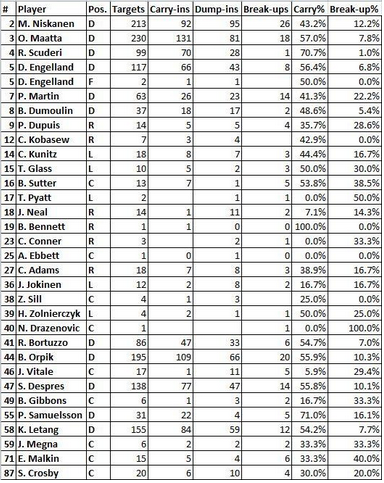 As a rule of thumb, the lower one's carry-in% the better, and the higher one's break-up% the better. We also need to take a moment and laugh at how horrible Scuderi was. Corey mentioned that Scuderi's numbers were literally the worst in the league last year.

Niskanen and Martin look like studs, but everyone else seems nondescript to me. I also noticed Orpik's 56% carry-in% and 10.3% break-up%, neither of which seemed good. But a few spots below I noticed Despres' nearly identical carry-in%. This was odd to me because Orpik was matched against really good competition who don't dump the puck in that often. Unless you're a really good player like Martin or Niskanen, your carry-in% numbers will be higher.

Simon Despres put up identical numbers despite seeing very weak competition. His opponents were third and fourth line scrubs who not only don't have the skills to carry the puck in a lot, but are likely instructed by their coaches to dump the puck and bang some bodies. I've made fun of Orpik's contract with Washington and his play from last year, and I think he's justifiably regarded as a bad defenseman right now. But his numbers are identical to Despres' despite much more difficult competition, which means either Orpik is better than we think or Despres is worse.

Deryk Engelland is a similar comparable. He has a 7% break-up% (slightly worse than Despres) but a nearly identical carry-in% as a defenseman. Engelland doesn't have the competition excuse since he and Despres saw very bad players most of the time. So I want to figure out why their numbers were so similar, especially because Engelland is the butt of jokes and Despres is a legit talent who was (supposedly) badly mismanaged.

Things got more strange after I read this great piece from Ryan Wilson. Ryan collected Corey's zone exit data to see how Pittsburgh's defensemen were exiting the zone last year. Again, Engelland and Despres had identical success rates in terms of exiting the zone. Moreover, the graph below that showed that Engelland and Despres were turning the puck over and icing it at the same rate as well. If we're only looking at these stats, either Engelland is much better than we thought, or Despres' struggles were more real than imagined.

Yet when we look at CF%, there's a clear divide: 52% for Despres vs. 44% for Engelland. That's a mighty big swing that would suggest one of them is doing a lot right while the other one is close to drowning. Zone start explains about 1%-2% of the difference--53% for Despres and only 46% for Engelland. Their competition, as mentioned above, was identical, so that's not the rest of the answer either. That just leaves teammates.

Hockey Analysis has data on each player's teammates for this year at 5v5 hockey and how much ice time they spent with each one. If Engelland had to play with crappy players, then that's a big part of the puzzle that's missing from the picture. So I looked at what percentage of Despres and Engelland's total 5v5 ice time they spent with the two big anchors on defense: Orpik and Scuderi. 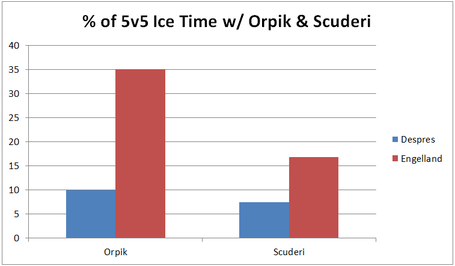 You can see that the coaches stuck Engelland with the dead weight much more often than Despres. Engelland skated with Scuderi more than twice as often as Despres relative to their ice time, and he was with Orpik nearly four times as much. The disparity in how much ice time they shared with these two is a big chunk of why their final on-ice possession numbers look so different.

Let's do the same thing for the bad forwards--Glass, Pyatt, Vitale, and Adams. 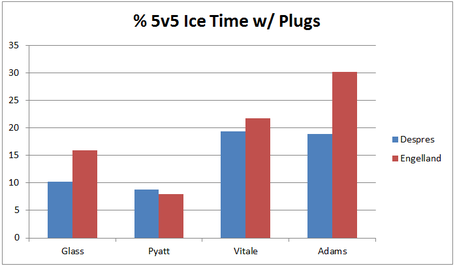 Similar story here. Engelland spends more time with three of the four plugs, and it's most pronounced with Glass and Adams. This is more evidence that teammates were part of the reason for the CF% differential between Despres and Engelland. Is there a similar difference with the good forwards? 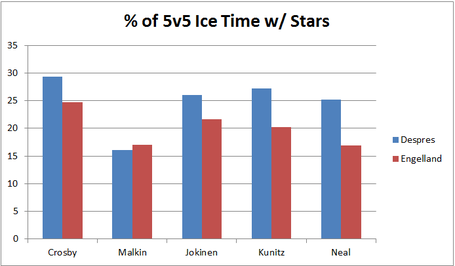 This is consistent with what we've seen so far. Despres was getting more time with the elite players who were posting better CF% numbers. I think there's a sizable teammate effect going on here. That isn't to say that the CF% differential between Despres and Engelland is explained entirely by context. Despres is a much better skater and he's ten years younger than Engelland. He's also got a more impressive pedigree and a supposedly higher ceiling. But the above analysis illustrates that the divide between the two players isn't nearly as large as some suppose.

What remains interesting to me is the fact that Despres' zone exit and zone entry numbers were so mediocre. Some believe that Bylsma's system explains Despres' struggles, but those zone entry numbers are individual events: it's Despres versus one forward, and his only job is force that player to dump the puck in or break up his entry at the blue line. I have a tough time imagining how any "systems" come into play when we're tracking these numbers on an individual level.

Zone exits are different in that a team's system can affect the outlets out of the zone that are available. So let's assume that was true in Despres' case. It still doesn't explain, though, why Maatta, Niskanen, Martin, and Letang all did fine. Nor does it explain how poor puck-movers like Engelland were putting up equally good zone exit numbers compared to Despres.

In short, I think these zone entry and exit numbers are important context in evaluating our defensemen from last year. And if David Johnson's research is right, they have the potential to be more important than CF% numbers (though we're not sure yet). I very much hope that Despres improves next year since the Penguins need him to be better. But I don't think it's accurate to pretend that Engelland was a replacement level player and Despres was a top-4 talent that was misused. On an individual level, they put forth very similar seasons when you break down the zone entry and zone exit numbers.