An article that lays out how I plan to track and record all of the 50-50 wall battles that allegedly are critical to puck possession.

Share All sharing options for: Tracking Wall Battles in the 2014-2015 Season

I tend to break down the evolution of hockey statistics into two phases. Phase one was introducing the idea that possession-based metrics were important in evaluating players and teams because they predict future goal-scoring (and thus wins) better than goal-based metrics. A lot of this foundational work was done at Irreverent Oilers Fans and Behind the Net, but I trace the formal birth of this idea to the now late JLikens in this article.

The second phase in the revolution was the use of wide-scale tracking operations to identify individual contributions to overall possession numbers. Like the justifiably discredited plus-minus statistic, Corsi and Fenwick are on-ice numbers, meaning that every player gets credit for a shot attempt, for or against, regardless of their role in creating that event. Corsi and Fenwick are still much better than goal-based statistics like plus-minus for the reasons discussed above, but some bloggers wanted to break the game down and start tracking certain things individually.

The first breakthrough came in recording zone entries, which focuses on whether a team carries the puck into the offensive zone with possession or dumps the puck in at the blueline, therefore surrendering possession. Eric Tulsky was the brains behind this project and he published his work in a series of articles (here, here, and here). He found that carrying the puck in led to twice as many shot attempts as dumping the puck in.

Teams have now publicly admitted that they track zone entries, and these numbers have become an integral part of modern-day hockey analytics. There's also a guy named Corey Sznajder who is watching every single NHL game from last season and tracking the zone entries for each team. It's a massive undertaking, but it should greatly enhance our understanding of who the best players are at driving possession. If you'd like to donate to Corey's project, please go here.

I personally would like to add a small contribution to what I've termed the second phase of the evolution of hockey statistics by tracking wall battles in Penguins games for the upcoming regular season. I mean the phrase "wall battles" to encompass all those 50-50, loose puck battles along the boards and behind the net that happen so frequently in games. Winning more of those battles than you lose intuitively seems critical to maintaining strong possession numbers, but we don't have any hard evidence for that. Tracking these events individually can provide that evidence, and also help identify which players are being carried along for the ride.

To set the parameters for this project, I consider wall battles to have two definitional components. First, the battle must occur within arm's length of the boards. While I know there are loose puck battles occasionally away from the boards, I'm more interested in those that occur where players can use the boards as support. Second, the battle is triggered either when two players are fighting or racing to a loose puck, or when one player is dislodged of possession by some action of an opposing player. Possession must change for a wall battle to occur, i.e. an unpossessed puck must become possessed, or a player must take possession away from his opponent.

A point that I'll reiterate throughout this article is that I'm not wedded to these requirements yet. If you have comments, critiques, or suggestions on how to define wall battles, please let me know in the comments.

Given that definition, here is what I plan on recording. I will track wall battles by wins and losses; the player who obtains possession of the puck at the end of the battle gets a win, and the opposing player gets a loss. If there are multiple players involved (they have to be engaged in the battle within arm's length of the boards), they too will be graded by the same criteria. We can then calculate the Wall Battle Winning Percentage (WBW%) metric using the following formula: wall battles won/(wall battles won + wall battles lost).

For ease of understanding, here is a sample screenshot with fictitious numbers that would look like what I am recording. 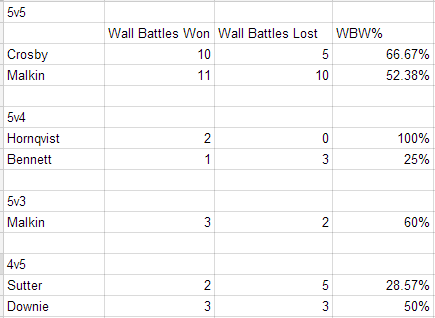 To help see this in action, below is a video with nine wall battles and a description following it of how I would record them. I've also included events in this video that I would not record as wall battles.

First Wall Battle (0:00-0:11): I count only one wall battle here, and that's when Calvert and Jokinen are battling below the goal line for that loose puck. Calvert wins the battle by kicking the puck along with his foot, so I'd give him the win and give Jokinen the loss. One important note: After Calvert kicked the puck, it made it to the half-wall, and was then passed to the blueline. Because the Jackets retained possession (passing it all the way to the blueline), they were never divested of the puck after Calvert won it, and thus there was no other wall battle to record.

Second Wall Battle (0:11-0:22): I count two battles here. The first one is when Malkin and Jack Johnson are racing to the loose puck along the boards. Johnson wins it by pushing it along to the goal line, so I'd give the Malkin loss. The second battle occurs below the goal line between Letang and Johansen. Johansen lifts Letang's stick and comes away with the puck to get a shot off, so I'd give him the win and Letang the loss.

Third Wall Battle (0:23-0:30): There's one battle here between Martin and Jenner, and I think it's interesting. Martin wins the race to the puck and throws it up the boards but no one is there, so Columbus recovers the puck. Nevertheless, my focus in this exercise is on recording who wins possession of the puck during these wall battles. What teams do afterward isn't relevant to me (though again, comments, suggestions, and criticisms are welcome). So I'd give Martin the win here and Jenner the loss.

Fourth Wall Battle (0:31-0:39): I count two battles here. First, Martin and Boone Jenner race for a puck at the blue line and Martin wins it, passing it down to Beau Bennett. Beau Bennett then passed it down to Crosby, and I wouldn't record what Beau Bennett did because there was no loose puck or change of possession. The battle down low between Crosby and Ryan Murray is close to the line because it's not clear Crosby ever loses possession of the puck. However, it looks like Murray knocks it away at one point, therefore creating a battle (please click image to enlarge it): 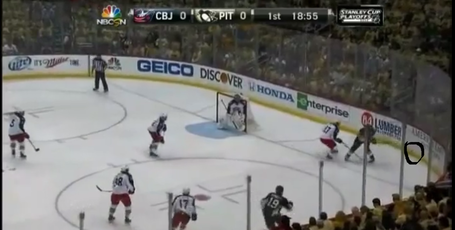 Thus, I would count this as a wall battle and give Crosby the win and Murray the loss.

Fifth Wall Battle (0:40-0:50): I count one battle here. In the beginning, David Savard rims the puck around the boards, and since a Columbus player picks it up, there's no change in possession. But then Craig Adams catches up to Jared Boll from behind and knocks the puck free (this appears to happen within arm's length of the boards). Gibbons comes in and recovers it but Boll knocks him over. He nevertheless gets the puck to Adams who takes the shot. This is a multiple player wall battle in my opinion, and I'd give Adams and Gibbons the win while giving Boll the loss.

Sixth Wall Battle (0:51-1:07): I count two battles here. The first one is a race between Niskanen and Letestu. Letestu slams Niskanen into the boards and comes away with the puck, so that's a win for him and a loss for Niskanen. Later, Niskanen returns the favor by knocking Jared Boll over and stealing the puck from him along the boards, so that's a win for Niskanen and a loss for Boll.

Seventh Wall Battle (1:08-1:15): I count one battle here between Beau Bennett and Fedor Tyutin. Bennett gets the win and Tyutin gets the loss.

Eighth Wall Battle (1:16-1:30): I count one prolonged battle here between Paul Martin and Jack Skille. They trade hits and the puck moves around a lot, but eventually Skille is able to dislodge the puck from Martin so that Calvert can pick it up. I'd record this as a win for Skille and a loss for Martin.

Ninth Wall Battle (1:31-1:40): I count one wall battle here between Cam Atkinson, Evgeni Malkin, and Matt Niskanen. Malkin doesn't really do a whole lot; it's Niskanen who comes in and wins the puck to get it out of the zone. I'm positive that Cam Atkinson will get a loss here, but I'm initially unsure whether to give just Niskanen the win or also include Malkin. After watching the tape a few times, I'd give the win just to Niskanen since Malkin did nothing of consequence.

In short, that's how I'd record those events. The big point that I want to reiterate is that I've tied these battles to puck possession. For there to be a wall battle, there has to be either a loose puck that two players are fighting for, or a situation where one player dislodges possession from an opponent. Either way, possession has to switch. I think this is important because if this isn't the criteria, I fear it would be nothing more than "there has to be some contact along the boards and it has to look like a battle to my eyes." I want a definition that is a bit more rigorous.

I'm most excited about this because you'll note from the video above that those nine sequences all occur within the first six minutes of the first period of a hockey game. So there are going to be a lot of events to track, which makes me confident that with enough games, we'll be able to separate the signal from the noise.

As I mentioned above multiple times, I'm open to comments, suggestions, and criticisms since I'm not wedded to this system yet. Let me know if you like what I've got or if you think it needs to change. Either way, I'm excited to get started since I hope this information will be useful in analyzing the Penguins during the upcoming season.