To celebrate, how about the highlight reel from this last season, where Sidney Crosby put up 104 points, running circles around the league to becoming MVP and boosting the Pittsburgh Penguins to first place in the Metropolitan Division.

Of course though, the season would end on a sour note, with Crosby only scoring only 1 goal and 9 points in 13 playoff games as the Pens were bounced early. But, let's use this time to remind that Sidney Crosby is still 6th all-time in NHL Playoff Points/Game behind five unknowns named Gretzky, Lemieux, Messier, Bossy and Orr.

And you just know that is his motivation this summer to come right back and pick up where he left off last regular season- which was by far the most dynamic and productive player in the game today.

One final chart (of 5v5 production per 60 minutes over the past few years courtesy of @mikedarnay) to show you just how dominant Crosby has been. It's his league, some other dudes just play in it. 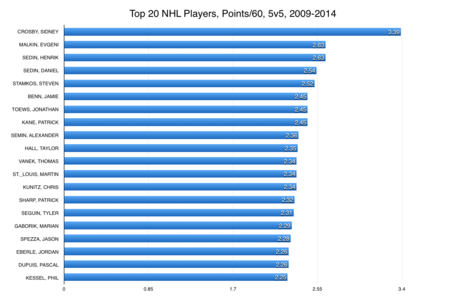