We take a look at the "breaking news" report about the Penguins new systems approach.

We were treated to an entertaining gaffe this afternoon as one of the sports outlets decided to create a story based on a joke tweet leading up to the Pittsburgh Penguins Training Camp. So in keeping with the spirit of fun and folly we shall recreate the story for you complete with subtitles for our foreign viewers.

It all began innocently enough with a tweet by Pensburgh's own Mike Darnay poking fun at the misconceptions surrounding the Penguins new systems approach.

wow RT @penguins: new Head Coach Mike Johnston says that "any players who dump the puck in while practicing will be hit with a taser"

It seems the sarcasm was lost on some of the twitter-sphere, as shortly after The Score posted a story about the new policy, which has since been taken down. 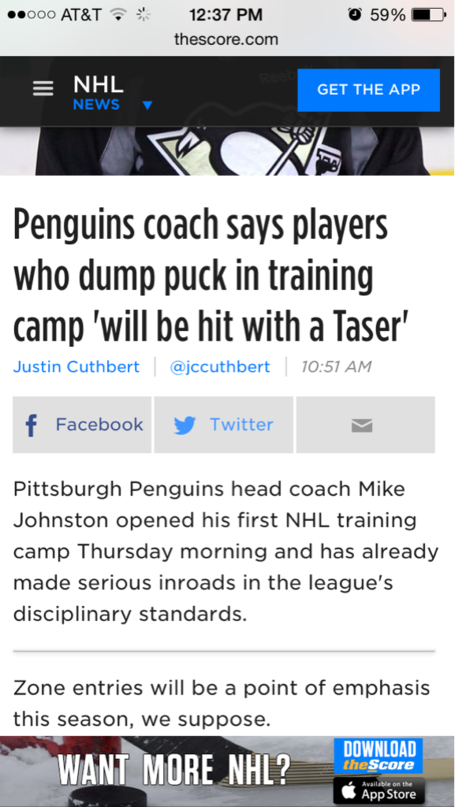 I had hear about it on twitter, with comments from Meesh, but it has since been picked up by HotTakery.

This certainly says a lot about the state of modern journalism, in which the rush to be the first to report a breaking story comes at the expense of time it would take to fact check the article and get bot sides of the story before publishing.

Of course not to be outdone, twitter fired back with their own fake apology for the misunderstanding.

Wow RT @TheScore We apologize for the incorrect story.We've punished the person who posted it by hitting him with a taser.

We apologise for the fault in the subtitles. Those responsible have been sacked.

There does not appear to be an official explanation or retraction from The Score, they simply chose to delete the story and pretend it never happened. But at least they were able to brighten our day by giving us a chuckle.

We apologise again for the fault in the subtitles. Those responsible for sacking the people who have just been sacked have been sacked.