The Pittsburgh Penguins will have some new, alternate threads this season, and whoa baby they are a blast from the past. Here's captain Sidney Crosby modeling the new duds: 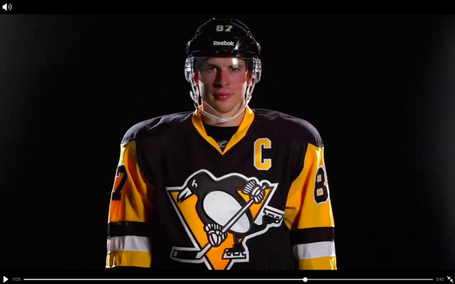 Of course, what's new again comes from something old, as this is the modern version of the same thing that Mario Lemieux and the Pens were winning the first

This is the third 3rd jersey the Pens have introduced in recent years, so it will probably stay in rotation for a couple years and then be cycled out for a new chance to take more fans money idea to change it up. But with this design, and the "Pittsburgh gold" version (that is reportedly favored by Mario), it wouldn't be shocking to see this evolve over the years into the regular jersey and the "Vegas gold" might eventually fade away.

There were also reports this summer that Marc-Andre Fleury ordered a pair of his classic bright yellow leg pads that he wore when he first broke into the league, so there's a potential for a "double throwback" to come.

Here's the schedule the Pens will wear these bad boys this season:

To get a jersey, you can go to the Pens team store in Consol (where they already have 'em in stock) or order online at TeamPittsburghGear.com. Go Pens.