The Pittsburgh Penguins are about to get some new duds.

Share All sharing options for: 2014-15 Pittsburgh Penguins 3rd jersey to be revealed soon

We talked about it a few months ago, and now a new 3rd jersey for this season has been confirmed by the team:

Be the first to own the new @penguins 3rd jersey. Preorder now from @PensGear or www.teampittsburghgear. pic.twitter.com/VmmcdulHyb

Buying a jersey sight un-seen is pretty ballsy, especially with the many directions the Pens can go for an alternate sweater.

There hasn't been much more floating around (come on @icethetics) so we'll have to wait and see if the rumors of a return to yellow at the expense of the "Vegas gold" is coming. Word is Mario Lemieux favors the old school yellow in the jerseys (think the ones that Pittsburgh won when Lemieux hoisted the Cup as a player), so if that is the case, it would seem likely that yellow could be back en vogue.

In the modern era, the Pens wore a light blue jersey from 2008-11 and then switched to the cursed dark blue Franken-jerseys from 2011-13. Fans love to talk about the alternate jerseys, and many of them love to buy them, so we'll see what the next money grab, err trend for the team will be soon.

No images of the sweater have been made available yet. However, I have been told by a source that it will be similar to the yellow jersey the Pens wore for home games during the 1983-84 season. 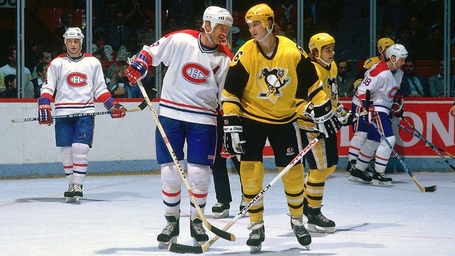