Something Changed for the Penguins After the 2012 Playoffs

An attempt to figure out why the Penguins' shot rates dipped dramatically after they lost to the Flyers in 2012.

Share All sharing options for: Something Changed for the Penguins After the 2012 Playoffs

I was having a discussion on twitter recently about the big changes for the Penguins after their playoff loss to Philly three years ago. Though Jordan Staal left and was replaced by Brandon Sutter, there were no other significant personnel moves. Yet Tyler Dellow previously wrote an article (that has since been swallowed by the internet) showing that Pittsburgh's strategy also likely changed. He could tell this by looking at the Penguins' shot differential following certain faceoff events--neutral zone wins, defensive zone losses, etc.

To back up a bit, there is a massive change that we need to establish. After Therrien was fired in 2009, the Penguins became a dominant possession team that year and won the Cup. Over the next three years, the Penguins were the second-best puck possession team in the league, behind only Chicago. The chart below puts this in perspective, using regular season numbers at 5v5 close:

Over the next two years, the Penguins' possession numbers fell off a cliff.

I want to try and identify whether this was a top-six problem, bottom-six problem, or every-forward-line problem. One way to see this is to look at how the CF% for individual forwards changed over this span. Since Malkin and Crosby rarely skated together at 5v5, we can look at their CF% numbers to see how the top two lines did both before and after the loss to the Flyers. The data is pulled from War on Ice. 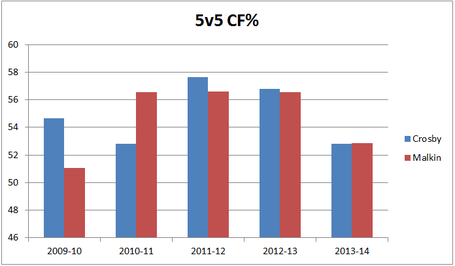 Overall, there's no jagged drop from 2012-13 onward. Malkin, for example, had his worst year in 09-10 despite the team finishing with the fourth-best CF%. The biggest inidcation that the top six didn't miss a beat was the carryover in performance in 2012-13. Both Malkin and Crosby kept up their elite rate of shot production despite any changes to the Penguins' system. Though their numbers dipped in 2013-14, each still had a better CF% that year than in at least one of the years from 2009-12.

To double check this, we can see if James Neal and Chris Kunitz saw a dip in their numbers after 2012. I am not including Neal's numbers from the 2010-11 season since he came over in a trade and only played 20 some-odd games in the regular season. 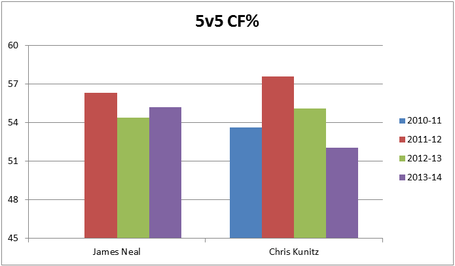 I think this is the same story we saw with Crosby and Malkin. There's little differentiation for Neal but a little more variability for Kunitz. Nevertheless, Kunitz still put up better possession numbers in 2012-13 than he did in 2010-11.

So if the team's drop in possession prowess was not caused by the top-six, that leaves the bottom-six. And things changed dramatically in that regard. One way we can see this with the third line is to compare Tyler Kennedy and Matt Cooke's numbers in 2011-12 (which included lots of play with Jordan Staal) with their numbers in 2012-13 (played mostly with Sutter). I would include more years but they both left for the 2013-14 season. 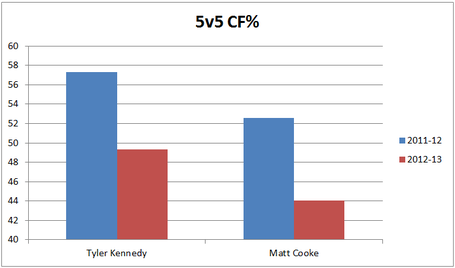 That drop is obvious. While the top-six was immune to whatever system alterations (if any) took place in 2012, the bottom-six got hit hard. But this doesn't explain exactly how much is due to personnel rather than the overall gameplan. Indeed, the fact that the top six carried on as normal is some evidence that the bottom-six struggles were more personnel than team approach. Some might suggest that Crosby and Malkin will always put up elite numbers regardless of the gameplan. I don't think that's true: both Crosby and Malkin put up mediocre to bad possession numbers under Michel Therrin from 2006 to 2009.

The fourth line took a similar plunge. Since there is so little consistency among fourth line players from year-to-year, I can't put a graph up showing a steady drop over a four-year period. But we can look at what the Penguins used in 2011-12 and compare that to what we saw this year to illustrate the dramatic changes. Here are the team's three fourth line forwards from 2011-12. 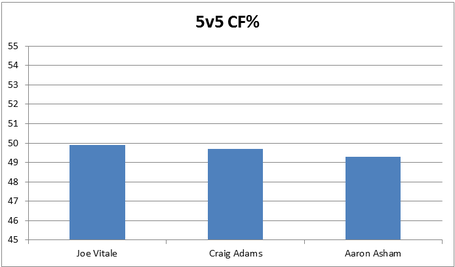 These are great numbers for fourth liners. The corresponding numbers from this past year were bad. 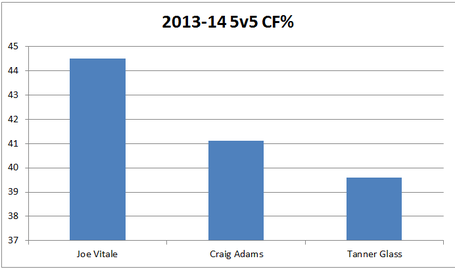 The general picture that I see is that while the top two forward lines continued as normal post-Flyers loss, the bottom two lines collapsed. Replacing Staal with Sutter is part of the answer, but another part that probably isn't discussed as much as it should be is adding Tanner Glass to the mix. In the three years before coming to the Penguins, Glass had an abysmal 42.1% CF%, good for 386/390 among all forwards over that three-year span who played 1000 or more 5v5 minutes. When Glass got to Pittsburgh, his two years here were just as bad: he posted a 40.6% CF%, good for 335/336 among all forwards who played 750 or more 5v5 minutes the last two years. Ray Shero dug his own grave.

It thus seems like the perfect storm to make the bottom six drop off. You lose Staal for Sutter, add Tanner Glass, watch Craig Adams get older, and fail to draft and develop younger players who are better depth options. This is the culmination of a story where the Penguins' changes were mostly personnel-based rather than a switch in scheme.

That being said, I think that story is partially inaccurate. The work of Tyler Dellow and simply watching the team change over the past two years suggests that the Penguins did adjust their system. Figuring out what those changes were will require many hours of reviewing video to track zone entries, zone exits, breakouts, and neutral zone faceoff plays. That is something I hope to undertake in the future.

Regardless, my goal here is to provide some clarity to the murky question of why a Penguins team that was so dominant for so long suddenly stopped controlling play. If it turns out that the team overreacted to what was a terrible series by Marc-Andre Fleury, that could prove to have been an enormous mistake.