Another summer, another quest to find skill wingers for the Pittsburgh Penguins.

Share All sharing options for: Pittsburgh Penguins rumors: Wingers for Sid and Geno

Among the most interesting blurb from Penguins GM Jim Rutherford's press conference was the admission that the free agency class isn't strong and that the team will try to use the trading market in order to provide another skill player for Sidney Crosby and Evgeni Malkin . Rutherford also left the door open for Kasperi Kapanen to make the NHL club next season, and admitted that the team botched the development of Beau Bennett by leaving him in the NHL on a 4 th line instead of playing a scoring line role in the AHL. GMJR also vouched for Chris Kunitz who he said played better than his production down the stretch.

Back on tangent, who are some targets the Pens could look at to add?

More importantly, what do the Pens have to offer? Most all of their best trading chips are gone, and the NHL players that they would be interested in trading aren't going to fetch a top-6 caliber return.

With Kunitz, David Perron and Patric Hornqvist the team has 3 pretty good scoring line wingers - if Kapanen or Bennett can grow into that role, that would complete the set, though it probably is too early to count on a youngster for such a critical scoring line role.

Here's some quick ideas that we had for players that are at least worth looking into: 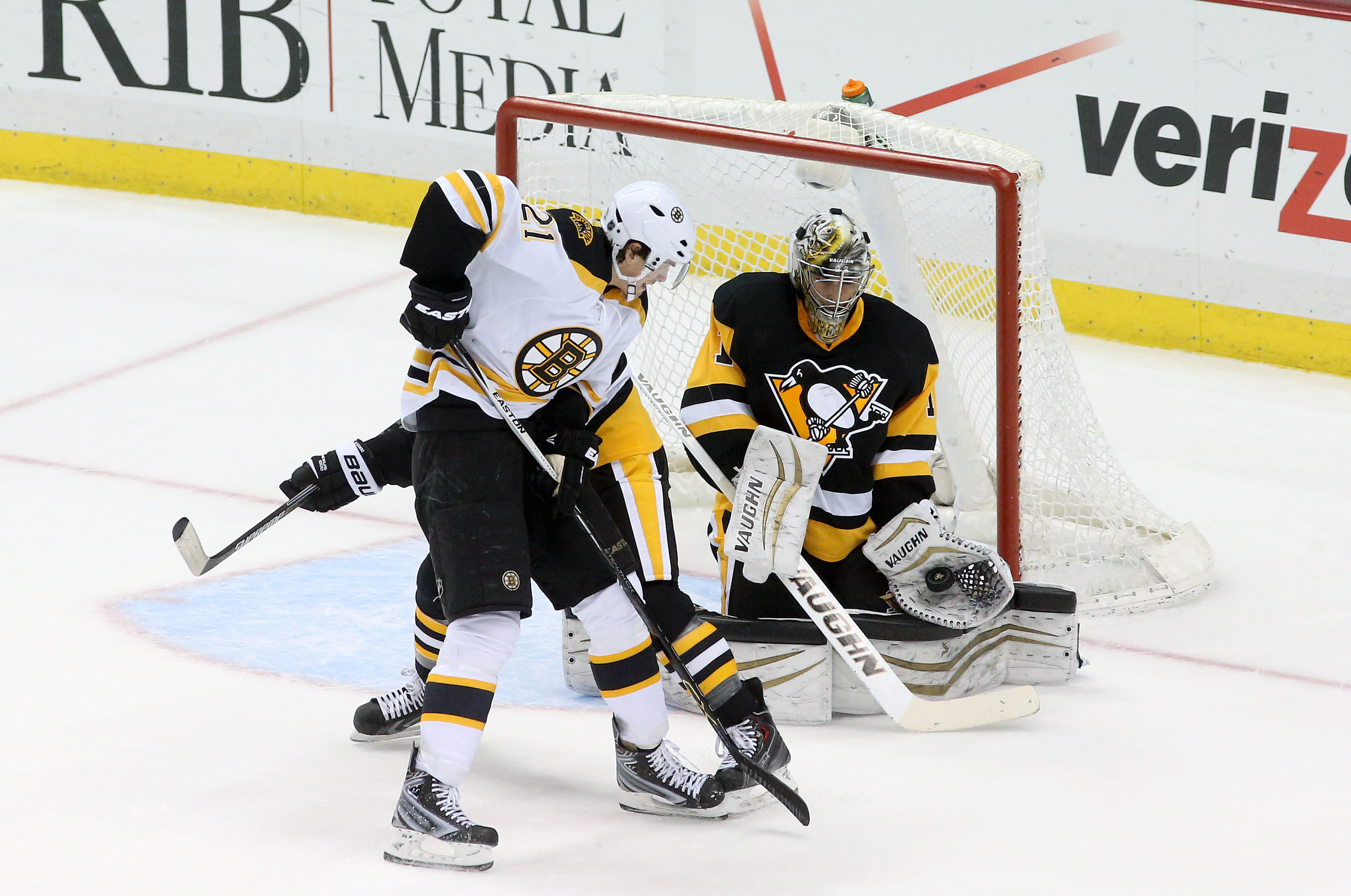 Boston is in a period of transition as they enter the post-Peter Chiarelli era. The new GM will inherit a roster that could use a shakeup and a player like Eriksson with a salary could be a good choice to move out the door. Eriksson, who turns 30 this summer, hasn't had the greatest 2 seasons in Boston- but he did score 70+ points for three seasons in a row in Dallas. If the new Boston GM would be interested in Brandon Sutter + a slight sweetener, the Penguins should be all over this one. Or even if the Pens can clear out Kunitz (and older player with more term) for a younger, potentially better one, it might be a good idea.

I know, I can't believe I'm saying this either(USA Today)

OK, get your eyerolls and sighs out of the way. Right before the deadline there was a report that Carolina was interested in retaining a "significant portion" of his hefty salary in order to get him out of town. Semin, though mercurial, still can produce points when in the right situation. Carolina has not been that situation where Semin played with a wide variety of players and some of his most common linemates weren't very good ones (Riley Nash, Nathan Gerbe, Victor Rask). This would be risky because 4 years left on a contract for a perceived less-than-always-motivated player doesn't sound good. But after a few years of a funk, if Semin can snap out of it he would potentially be the biggest "home run" choice on the market. Or the biggest headache.

This just in: Chicago will be looking to clear out some salary at the end of the season. Toss them a pick/prospect and they'd probably be willing to part with Versteeg. If the Pens wanted to be very bold, they could try to take a run at rumored to be on the trading block Patrick Sharp , but his $5.9 million salary, as well as his high acquisition price is probably enough to scare them away. Versteeg would represent a solid top-9 player, and has the same cap hit as Nick Spaling. Trade Spaling somewhere else for a pick, and offer that pick here for Versteeg. It would be a big upgrade for the Penguins.

Ryan Wilson at Hockeybuzz did some nice research and leg-work on why this might be an attractive pickup.

In addition to probably having the way Therrien uses him as a negative, Parenteau has a lot of history "riding shotgun" and putting up great production when in a role with skill players, dating back to 2010-12 when he scored 120 points in 161 games when used with John Tavares and the Islanders. In some ways, he reminds me a lot of a Jussi Jokinen type - good at everything, but not really a standout/gamebreaker type. Parenteau's contract has 2 less years on it than Jokinen's, which is why he makes the list.

Big changes might be happening in St. Louis after their latest loss. It's worth a look to see if they are in the mood to move any of their bigger pieces. Oshie makes sense being as he isn't truly a core player for them, and with his Olympic reputation his perception probably out-weighs his true value, so maybe they get a good price for him. Stylistically, Oshie would seem to mesh on the Penguins top six.

Kassian scores a goal against the Pens (USA Today)

This would be more of a project, but could pay off. Kassian is the youngest name on the list, but also probably the least established so far. I'm not even sure what Vancouver would want for him, but being as they seem stuck in a rut, trades might be on their radar too. To me, this is a lost opportunity for a Simon Despres trade - swap out 2 former first round picks for younger guys that might need a change of scenery. Instead, that won't be happening, but since Kassian hasn't established himself yet, maybe Vancouver is ready to move on. Never hurts to find out.

As we talked about yesterday, signing this Russian dynamo wouldn't even take a trade, just a sales pitch on why he should come across the ocean and play for Pittsburgh. Panarin will be teammates with Evgeni Malkin for a couple weeks, ideally the Pens have Geno start the recruiting.

It remains to be seen how many of these players are actually viable targets, let alone potential good ideas depending on their acquisition costs, but the Penguins have made the first step. They've identified they want to add more skill to their top 6. They know it's probably going to take a trade. Now they just have to hit the phones, find out which players are available, and which avenues it would make sense to make a deal. The above are just some reasonable options that could be out there, use the comments to air out any more ideas that could be worth exploring!