Our ranking of the best young players in the Pittsburgh Penguins organization continues!

The list of the top 25 players in the Pittsburgh Penguins organization soldiers on, as endless as the offseason. Catch up with the earlier installments here:

The biggest riser on our list by far, Wilson rocketed up the ranks after a very successful rookie season. He split time between the AHL (scoring 41 points in 55 games) and made his NHL debut, famously getting hurt just shifts into his first game.

But Wilson redeemed his season, getting inserted into the NHL lineup for 3 playoff games. After that didn't work out, he scored 4 points (2g+2a) in the final 3 games of Wilkes-Barre's season.

After the off-season there's only 1 or 2 spots left on the NHL roster for forwards, at this point, and Wilson will be in a battle with a bunch of other young players for that spot. Working against Wilson will be an off-season wrist surgery; will he be 100% and ready to win a spot? If not, it might be back to the minors for at least the start of the season.

It's clear to see that the coaches love Wilson's speed and energy - they wouldn't have played him in NHL playoff games at 21 years old if they didn't think very highly of him - but we will see where he tops out. He isn't going to be a huge point producer in the NHL, so a bottom-6 wing role is probably his ceiling. However, the team can use young, effective (and cheap!) players and Wilson certainly can be all of that.

The Penguins second round pick in 2015 cracks his first list all the way up at #7. In a way, it's because of the lack of depth that Pittsburgh has for young players: Sprong is by far the organization's best skilled winger prospect. In fact, after trading Kasperi Kapanen earlier this summer, Sprong is the ONLY blue-chip top-flight offensive minded winger in the organization.

Sprong is still far out from NHL play, he'll need significant time to improve his strength, two-way play and just gain experience. He'll be back in the Q next season - where he led his team last year in goals (39), assists (49) and points (88), and he should probably have another very successful point-producing season in the offensive minded QMJHL.

Jonathan Bombulie of the Trib had an interesting description of Sprong from last month's development camp, "he’s got a funky way about him, a wide stance and lots of head and shoulder fakes. He carries himself like a star, for what it’s worth." The last part is interesting, especially for a skill player. You want those guys to be sure of themselves and it seems like Sprong definitely doesn't hurt for confidence. 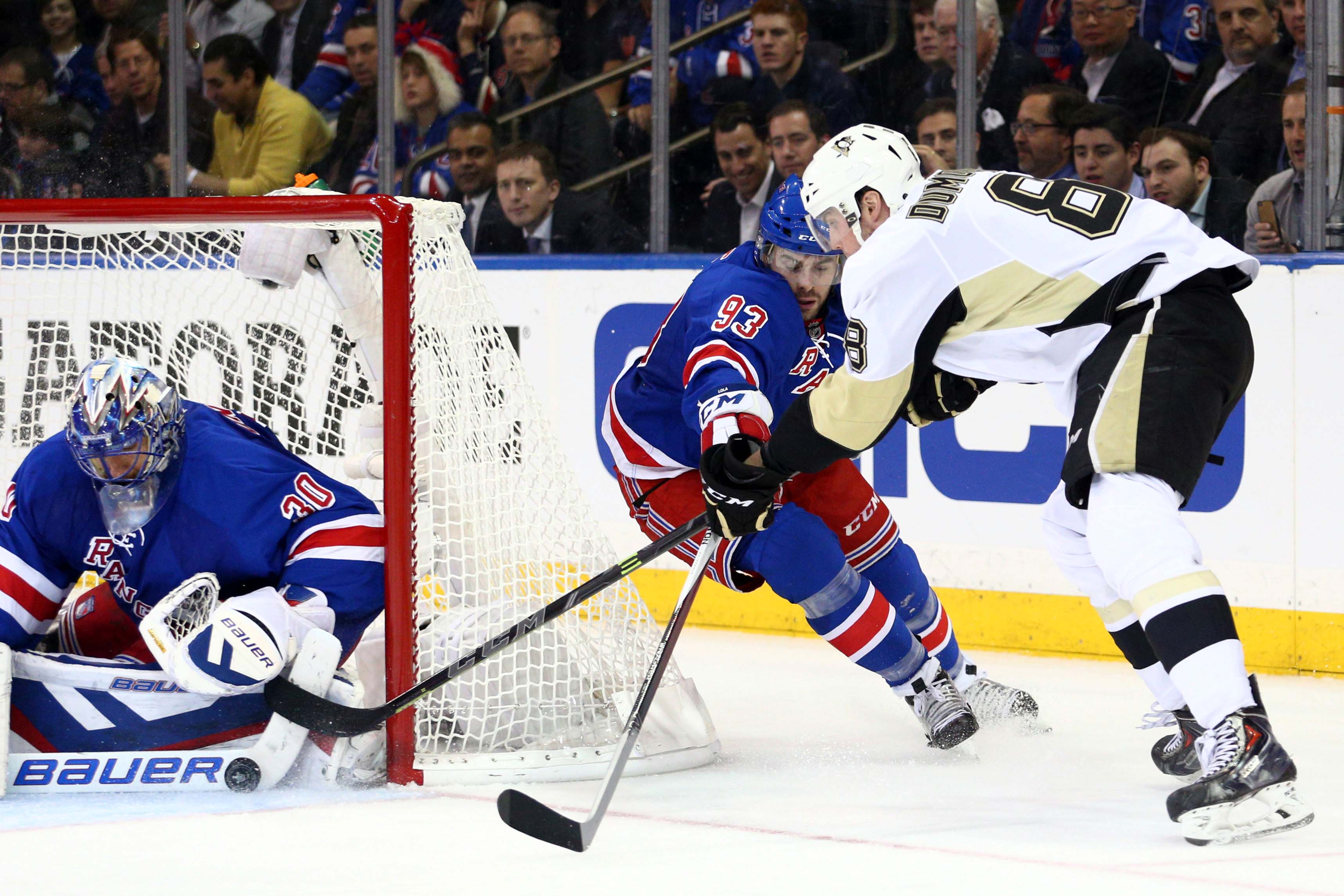 After three up-and-down seasons as a professional, the Penguins have finally cleared the runway for Dumoulin to be penciled into the NHL lineup for next season. The 23 year old Dumoulin has survived, where other young defenseman like Scott Harrington, Simon Despres and Philip Samuelsson have been traded off in the past season.

Dumoulin had a similarly "bittersweet" type of season in 2014-15, he was great on the first pair in Wilkes-Barre (playing 62 games and putting up 33 points), but a little rockier in the 8 games in Pittsburgh that he appeared in during the regular season where he wasn't very good. But Dumoulin's season ended on a higher note in the NHL playoffs, where he played all 5 games against the Rangers and wasn't on ice for a single goal against. Even though he was heavily sheltered and played low minutes.

It will be interesting to see where Dumoulin slots in. Can he beat Tim Erixon and Adam Clendening for a spot in the opening lineup? Will Dumoulin get to play with Ben Lovejoy, or wil he be saddled with the unenviable task of playing with Rob Scuderi? Can he grow into an NHL niche?

It's finally time for the Penguins to give the younger players a chance, and Dumoulin will be a beneficiary. Now it's just up to him to make the most of the opportunity.

For a player who just turned 21 in March, and hasn't played but 1 game in North America (a playoff game in WB/S last season), Oskar Sundqvist sure does have a lot of excitement and expectations for 2015-16 for a lot of Penguins fans. The 6'3, 210 pound player out of Sweden had a successful 2014-15 playing for Skelleftea scoring 19 points (9g, 10a) in 41 games. That was his second season playing against men in the top league over there, an impressive feat.

Also impressive was Sundqvist's performance in 2014 NHL training camp, where he was one of the better forwards in camp and came close to making the NHL team in a 4th line role. The team opted to send him back to Sweden to play a bigger role on his club over there and brought him back when their season ended.

With the addition of Matt Cullen (plus signing Sergei Plotkinov and re-signing Beau Bennett), the Penguins don't have a ton of open spots for their NHL club. It's possible that Sundqvist could make the team out of camp this year, courtesy of Eric Fehr 's recovery from off-season surgery, but with Fehr, Cullen and Nick Bonino all as potentiall bottom 6 centers, Sundqvist's quickest path to the NHL this season could be on the wing. Even there, however, the Pens are pretty deep if they stay healthy.

So if Sundqvist is ticketed for WB/S, it's not a disappointment or the worst thing that could happen for his development. As mentioned above, he's still a very young player, and one that needs to adapt to the smaller ice dimensions of North America, as well as the style of play in the NHL/AHL, as well as the Penguins systems, coaching and terminology that will be coming at him in English. Easing into the transition in Wilkes-Barre could be a blessing as well, however with Sundqvist's size and ability, he probably isn't going to be a player who is in the minors for very long.